Report and Photos by Barry Griffiths

When the stunning bright blue vintage jet, with its huge shark’s teeth, flashed by in its high speed pass, the spectators at CFB Bagotville, QC were treated to a spectacular example of Canada’s rich aviation heritage. This classic jet, decked out in its striking paint scheme commemorating the “Silver Shark” flown by the Royal Canadian Navy’s VU32 squadron when it disbanded in June, 1992, was the venerable CT-133 “Mako Shark”, owned by the Waterloo Warbirds, and still flying fast and low at 60 years of age.

Originally spawned from Lockheed’s first generation P-80 Shooting Star jet fighter in 1948, the rugged and exceptionally beautiful T-33 was the world’s first purpose-built and most widely-used jet trainer. It became the backbone of the post WW II US and Canadian air forces and continued in its jet training role long after its single seat ancestor had been replaced by more sophisticated front-line, fighter jets.

The genesis for Canada’s purchase of a large numbers of T-33s, renamed the CT-133 Silver Star, came as the 1950s emerged and the RCAF received Canadair CL-13 Sabre fighters and Avro Canada CF-100 all-weather interceptors to equip its fighter squadrons for an air defense role with NATO’s No. 1 Air Division in Europe. Canada had also committed the RCAF to the NATO Air Training Plan by providing the training and conversion to jet fighters for thousands of NATO aircrews. 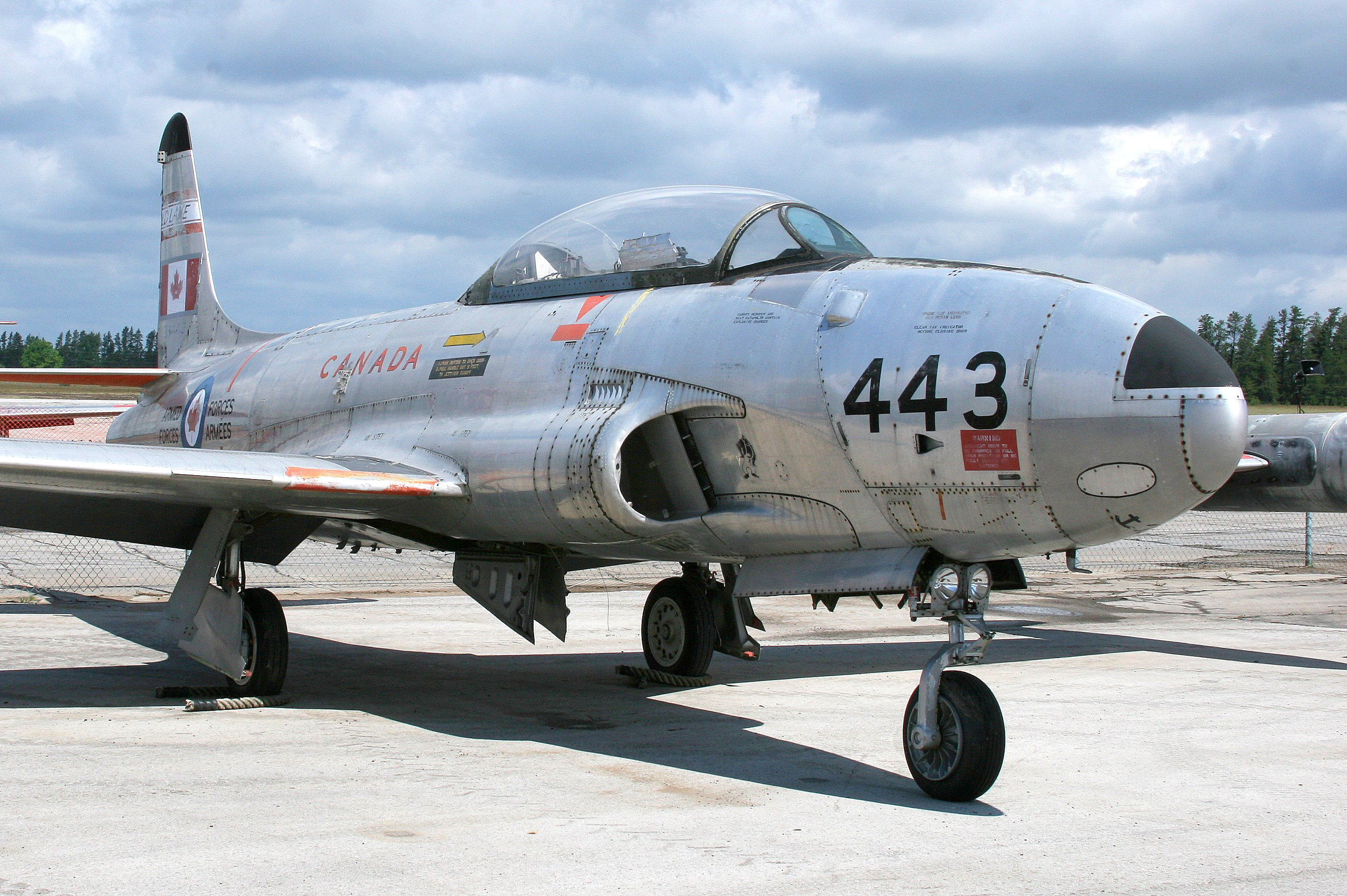 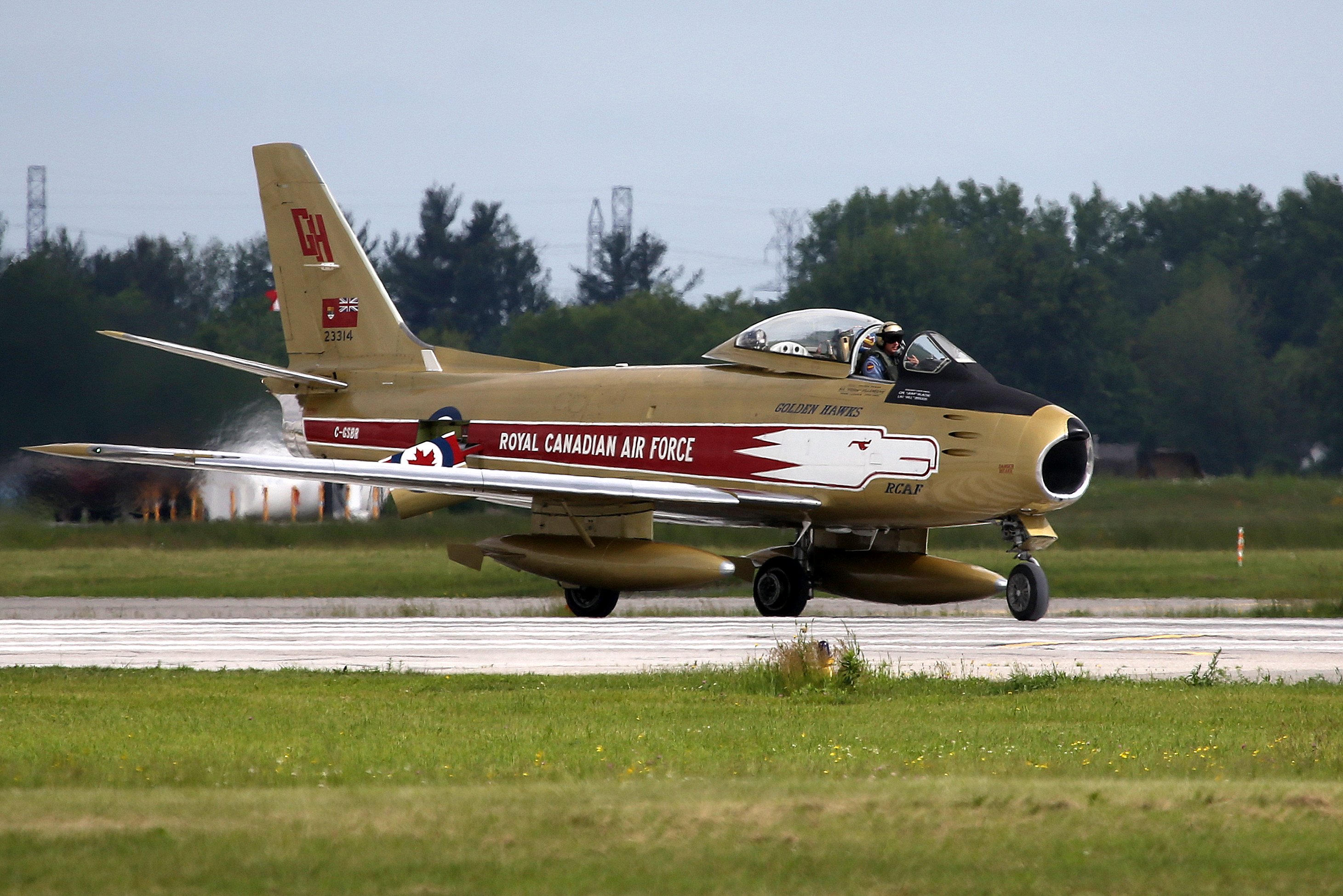 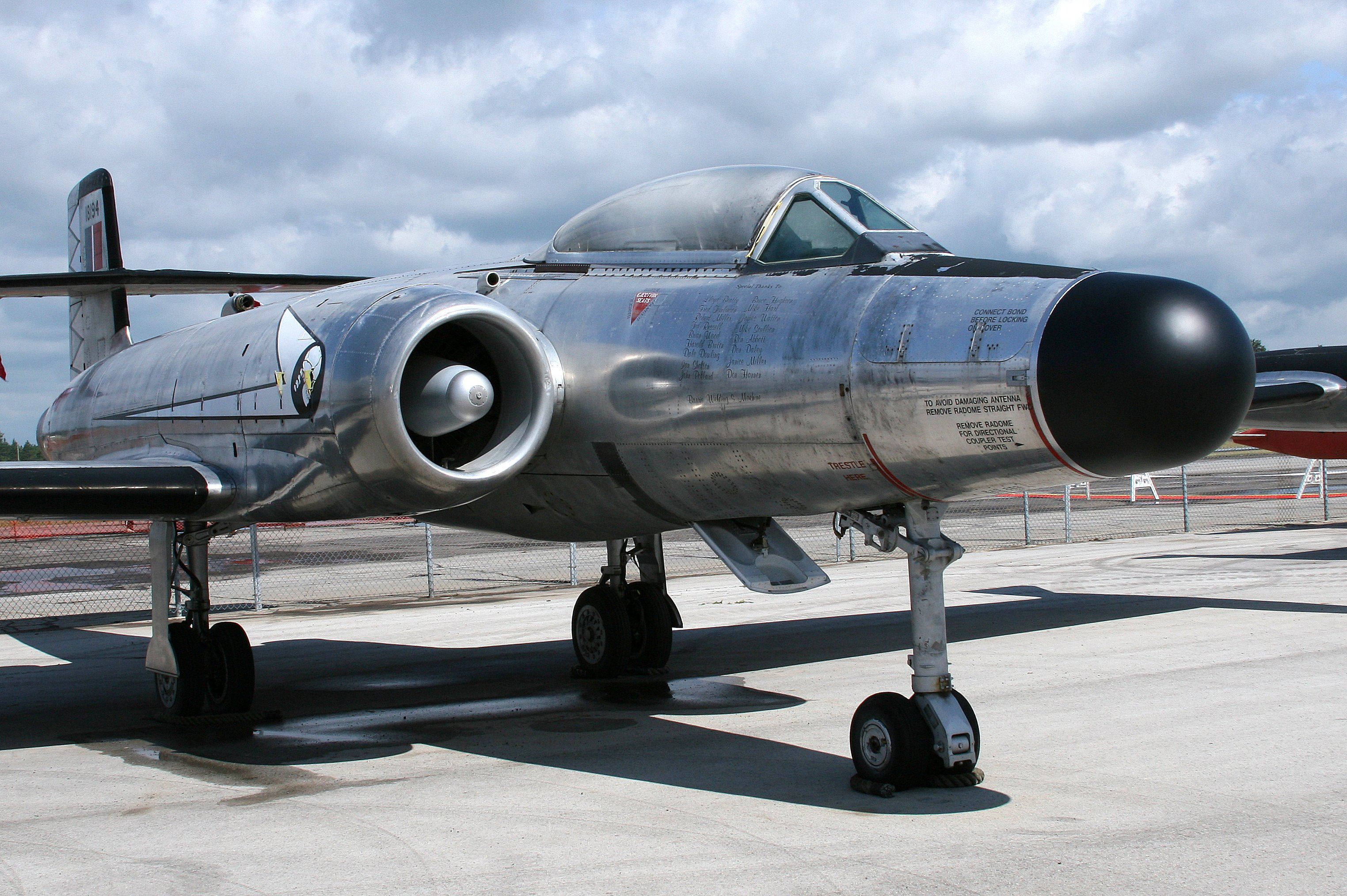 In order to meet these huge commitments, Canada needed an advanced jet trainer that would allow its veteran pilots and instructors, who had learned to fly and fight on propeller-driven aircraft, to convert to the RCAF’s new jet fighter/interceptors. Since Lockheed had developed the T-33 specifically from the P-80 airframe to transition prop-powered pilots to the new jet technology and tactics, it was decided to adopt the T-33 as the sole jet trainer for this undertaking. As a result, Canada began building the CT-133 Silver Star, under license from Lockheed in 1951, and when production finally ended in 1959, 656 CT-133s had been built. Some of these airplanes appeared in NATO air forces, as aircraft surplus to the RCAF needs were transferred to France, Greece, Portugal and Turkey under NATO Mutual Assistance in the late 1950s.

Soon after the first Silver Stars were delivered to the training squadrons, the RCAF officially adopted the T-Bird as its primary jet trainer. It continued in this role until 1975 when the RCAF withdrew it from its jet training role. Although it appeared to be a direct copy of the T-33, the Canadair CT-133 was equipped with the more powerful Rolls Royce Nene 10 turbojet, rather than the T-33’s Allison J33 power plant, and also had distinctive large wing-tip fuel tanks fitted to increase its range.

During the operational years, and as the Cold War was winding down, the RCAF reduced the number of T-Birds in its inventory by placing many of them in storage or selling them, through the Crown Assets Corporation, to corporate and private buyers at rock-bottom prices. In fact, the bargain-basement Canadian T-Birds attracted a great deal of attention from Americans who quickly snapped them up from the Canadian Government. In short order, these Silver Stars popped up in private hands all around the USA, sporting American registrations and a wide range of color schemes. 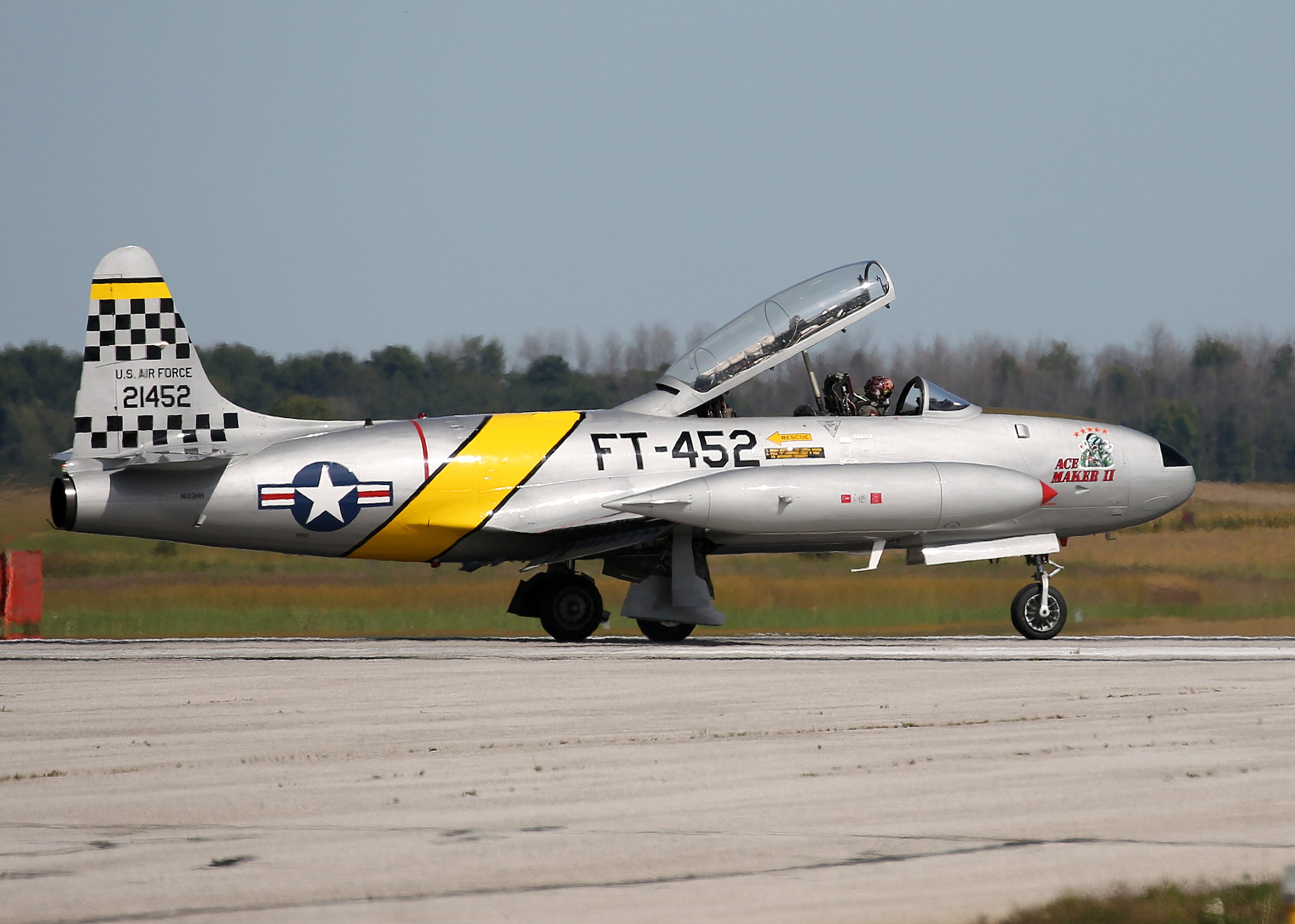 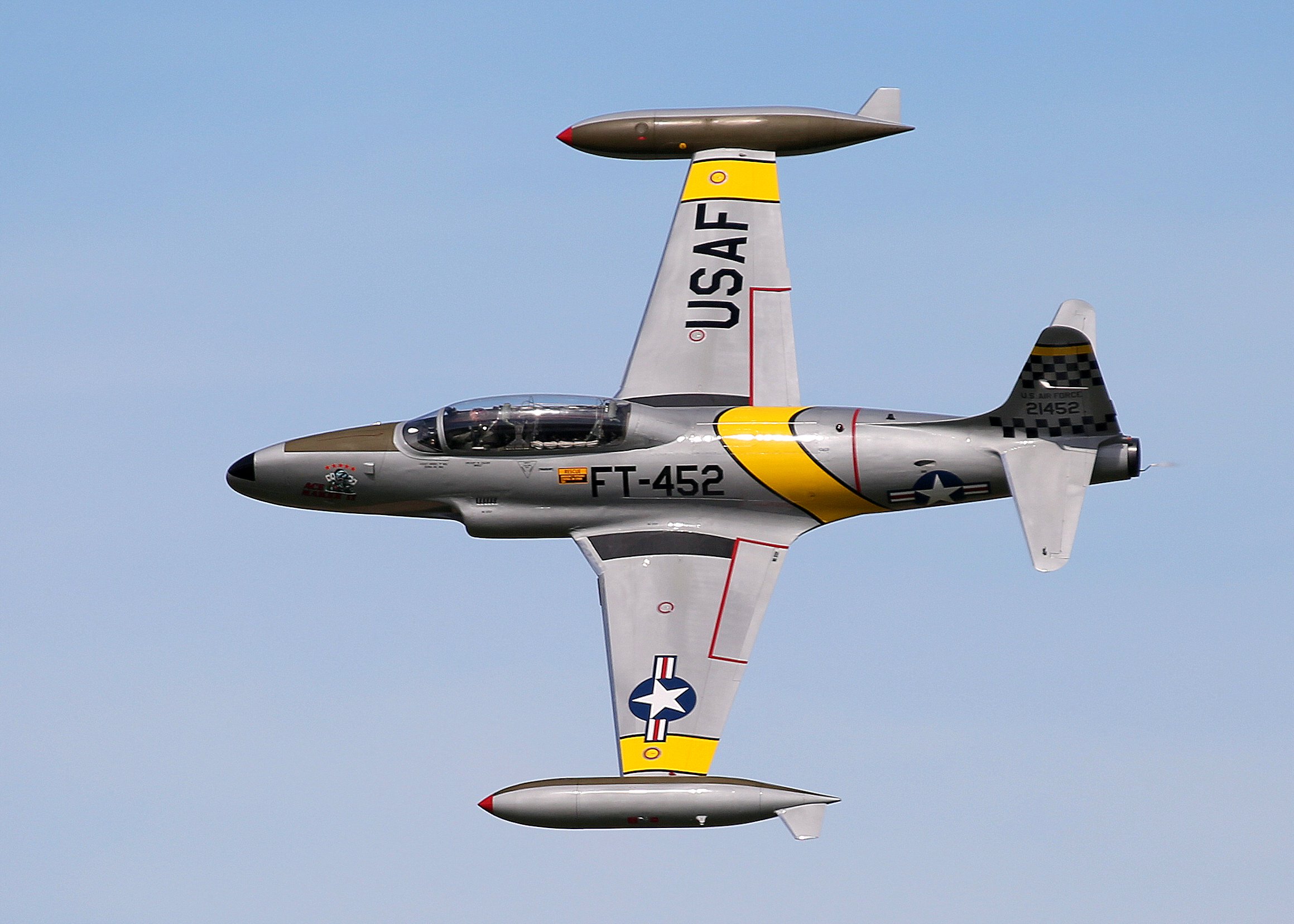 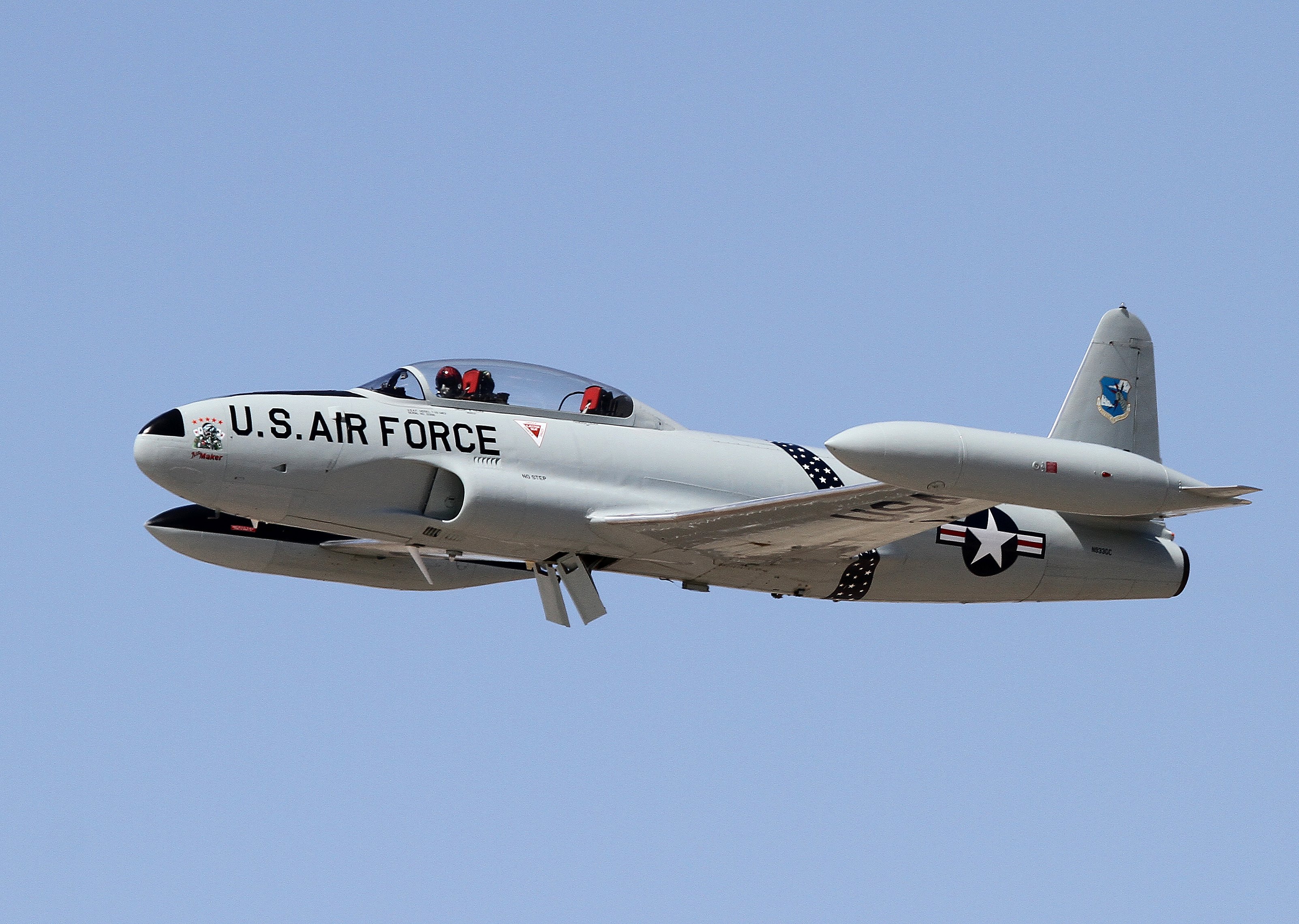 The first privately-flown CT-133 in Canada was purchased from the Government of Canada in 2007 by the Waterloo Warbirds of Waterloo, Ontario, an organization dedicated to inspiring a new generation of aviators with Canada’s unique aviation history. It required a three year overhaul by a small group of hard working volunteers before it took to the air in 2010 and, shortly after, its historically accurate gray fuselage was re-painted in its current brilliant blue paint scheme. 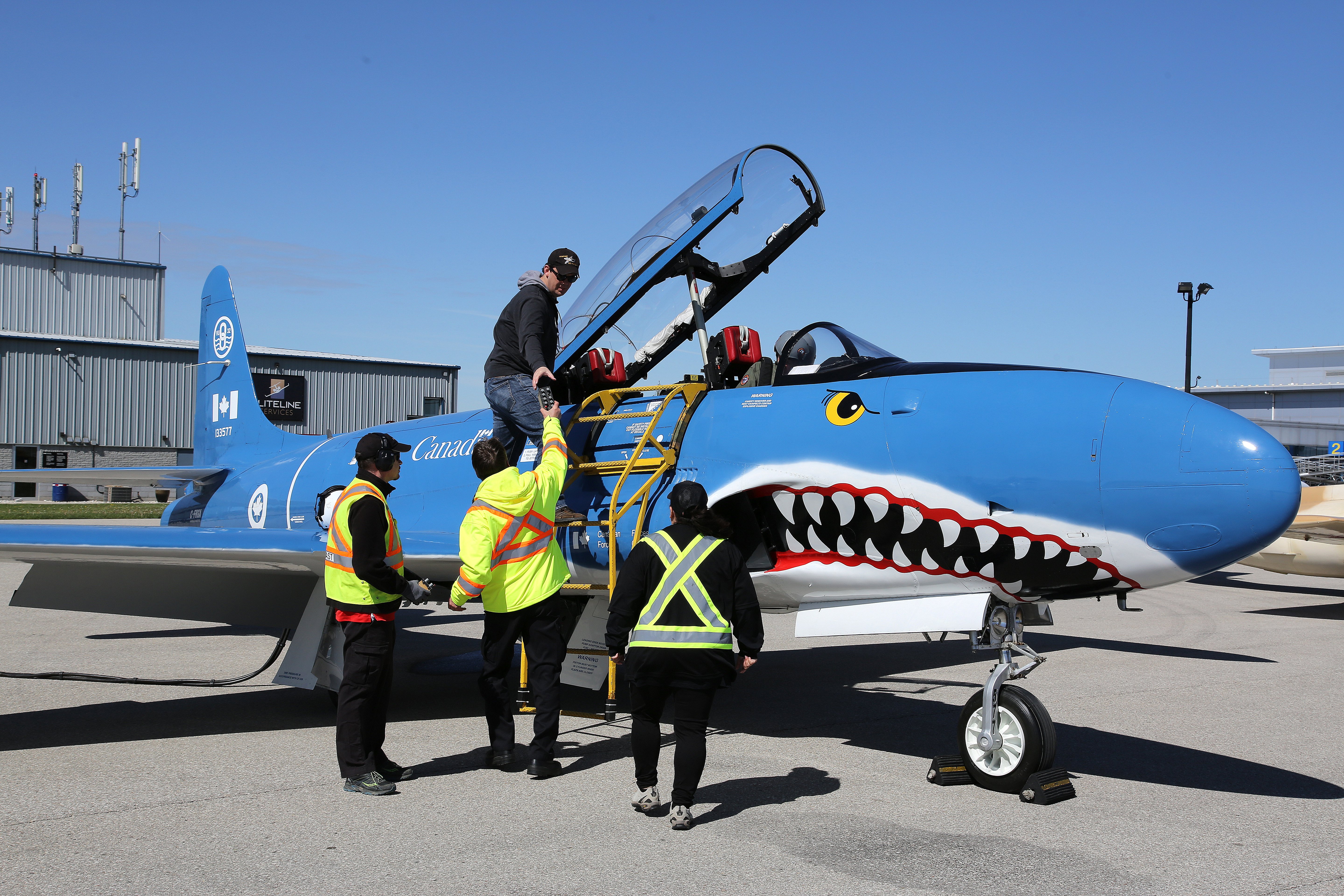 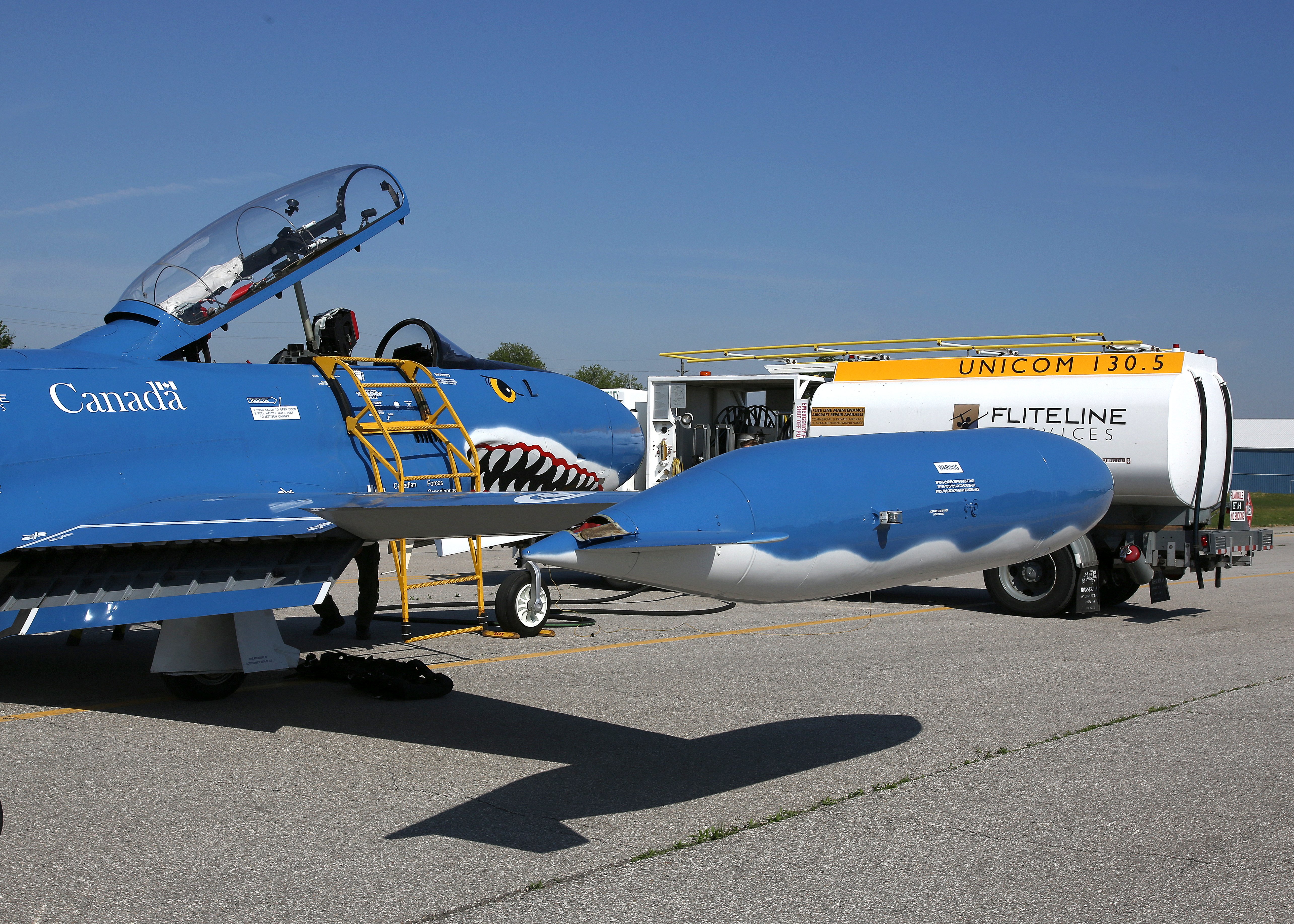 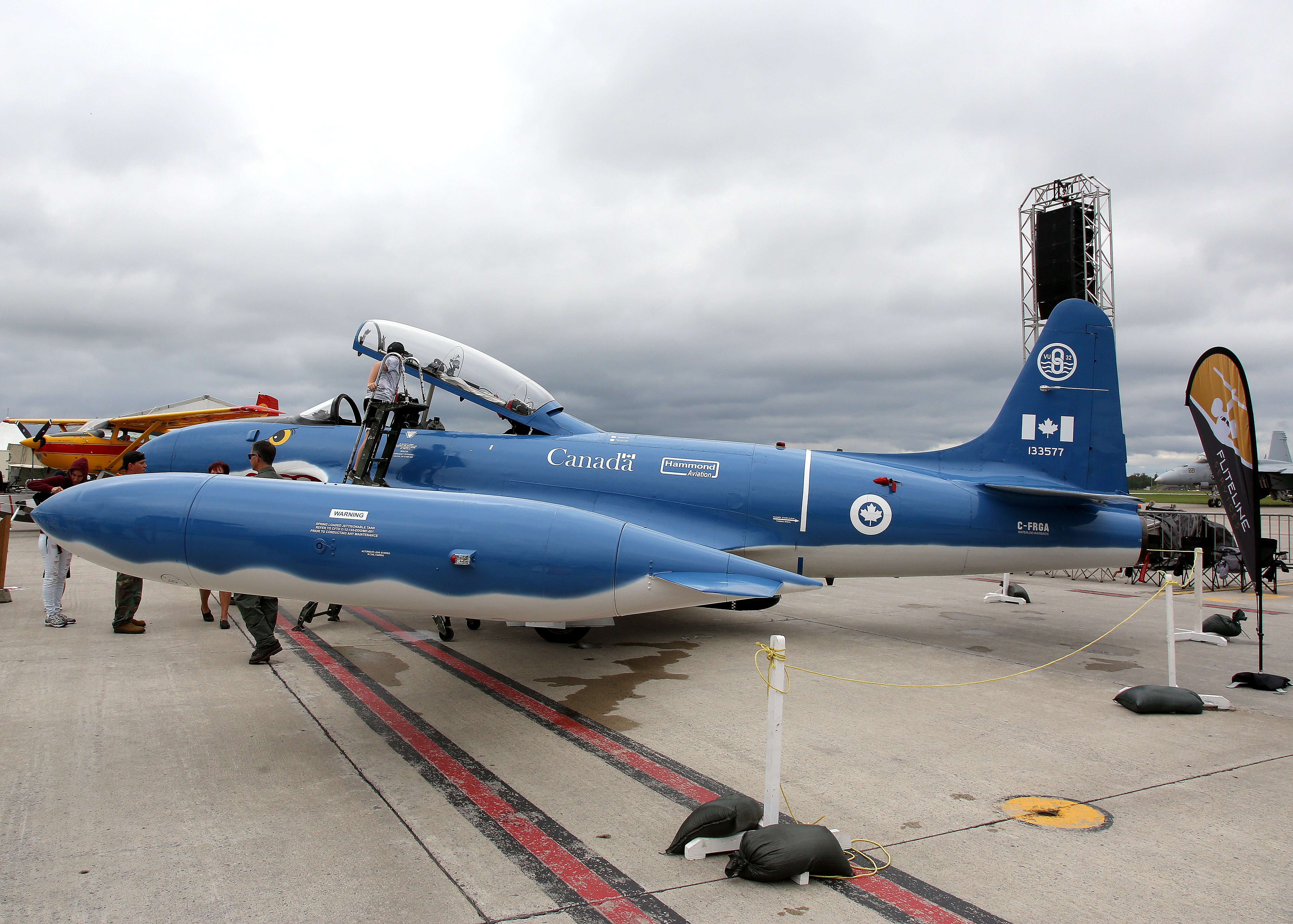 APD observed the “Mako Shark” at CFB Bagotville and at its Waterloo Warbirds hangar, in Waterloo, Ontario where it is prepped for air shows and departs for passenger flights around the Waterloo area. 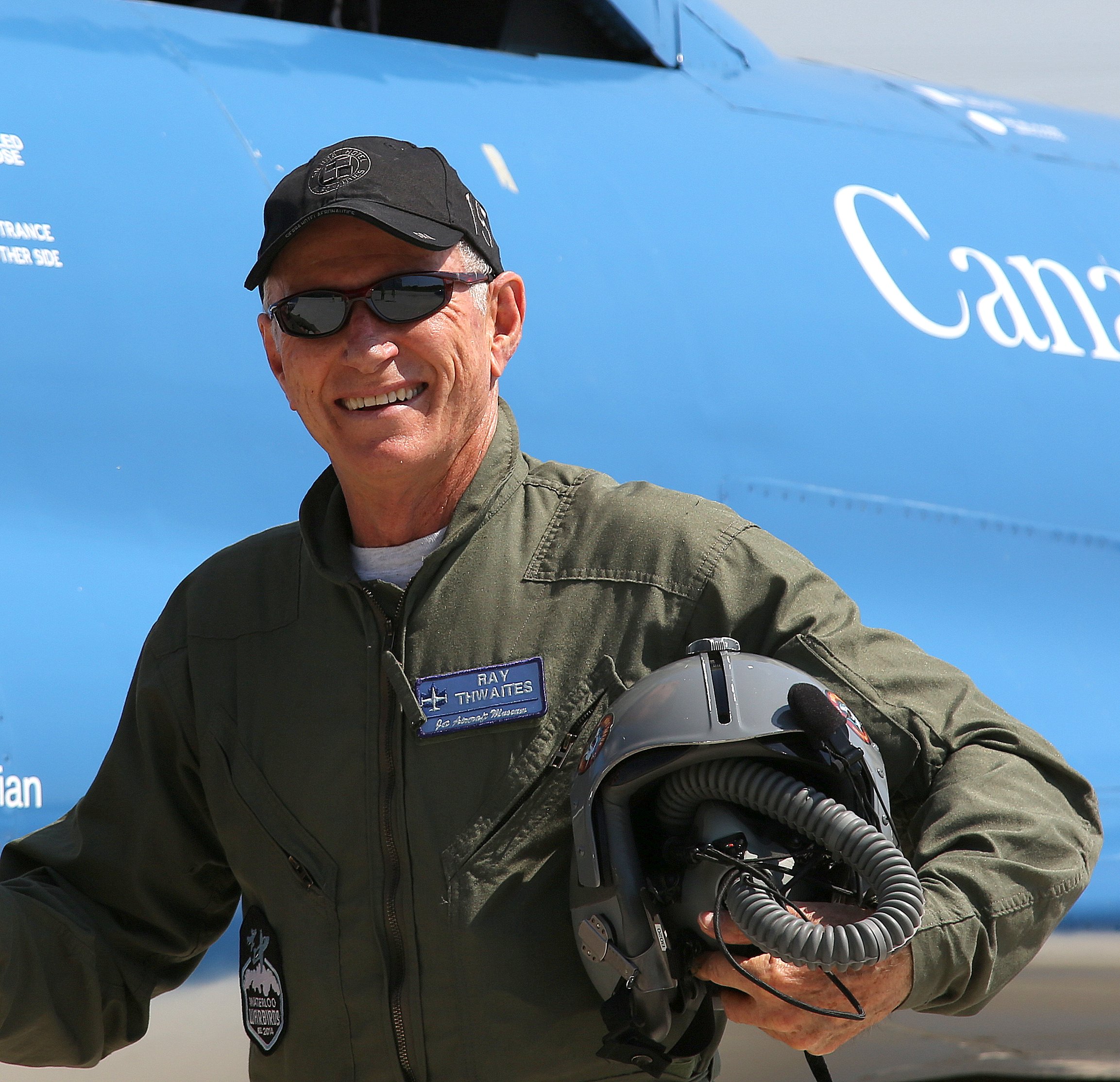 During our time there, we had a conversation with Ray Thwaites, currently one of the pilots of this stunning septuagenarian, who gave us some fascinating insights into its classic flight characteristics.

When he discussed flying the CT-133 with us, Ray made the point that, “There are a lot of similarities with all jets; you don’t have propellers creating instant lift on the wings so there is an inertia issue. The T-Bird, like the B-727 which I used to fly, is an inertia airplane that if you don’t have power on, then you aren’t going to fly. The T-33 is a heavy aircraft, at least relative to smaller aircraft, that has the same sort of inertial behavioral patterns in which you always fly with the power on”.

One of the exciting manoeuvers that Ray performs, both from a spectator’s and back seat passenger’s perspective, is the low level, high speed, downwind pass followed by a sharp break. He related, “Normally, we take off with a little bit of fuel in the tips and burn that fuel off as we fly out to the practice area. Then when we are at 5,000’ we do a couple of rolls, to see how the passenger feels about it, before returning to the airport for some low level passes with breaks on the downwind”. 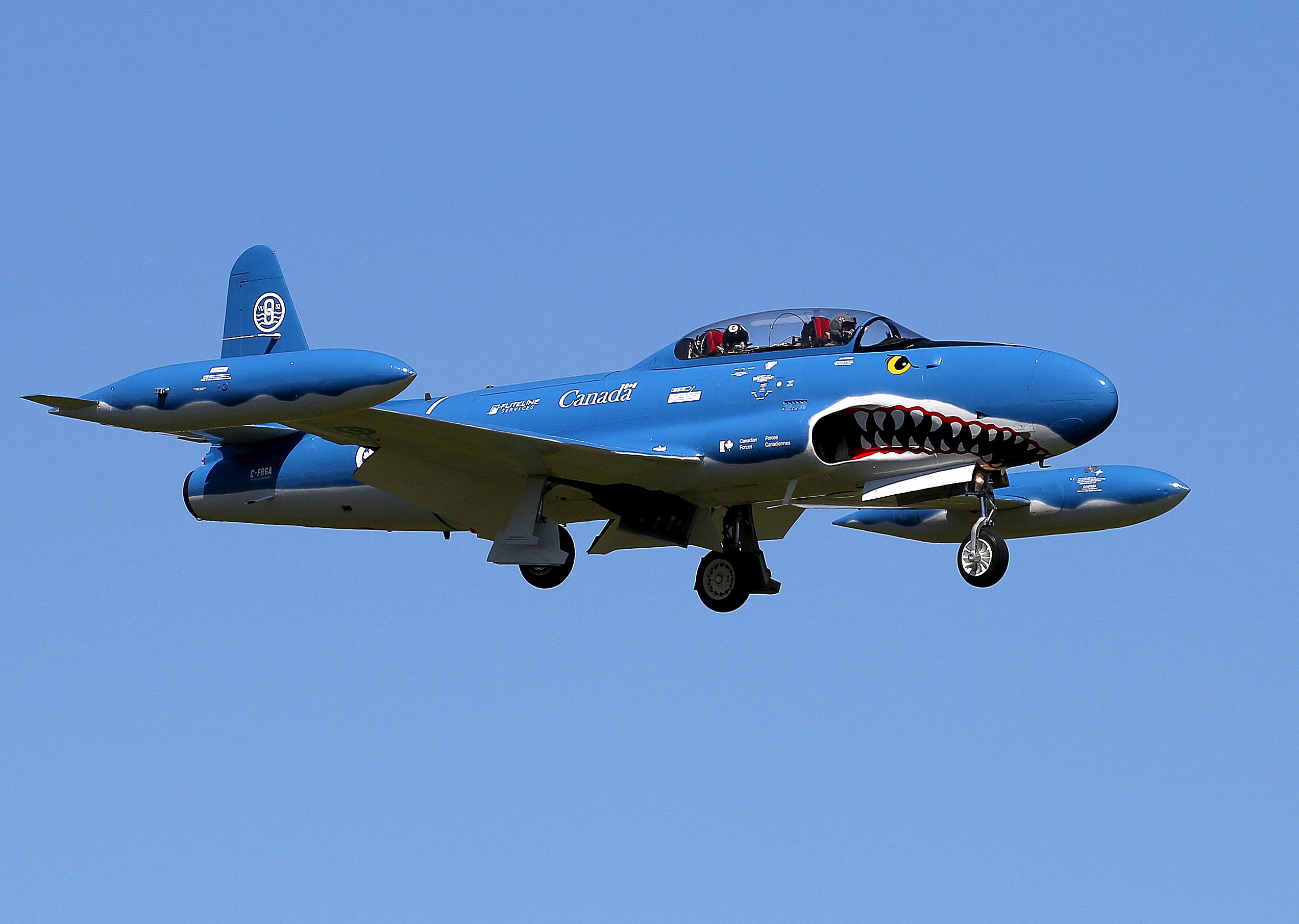 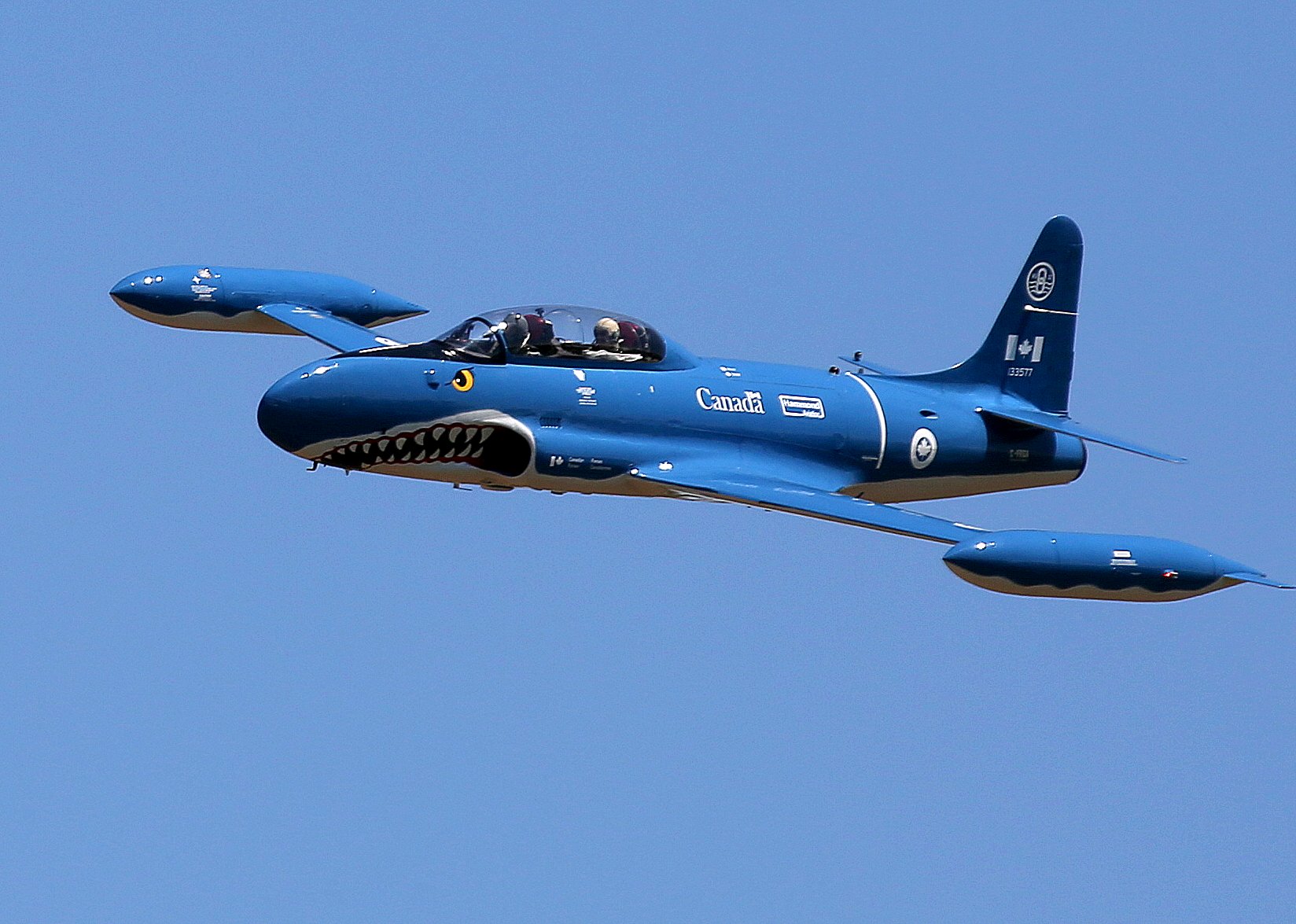 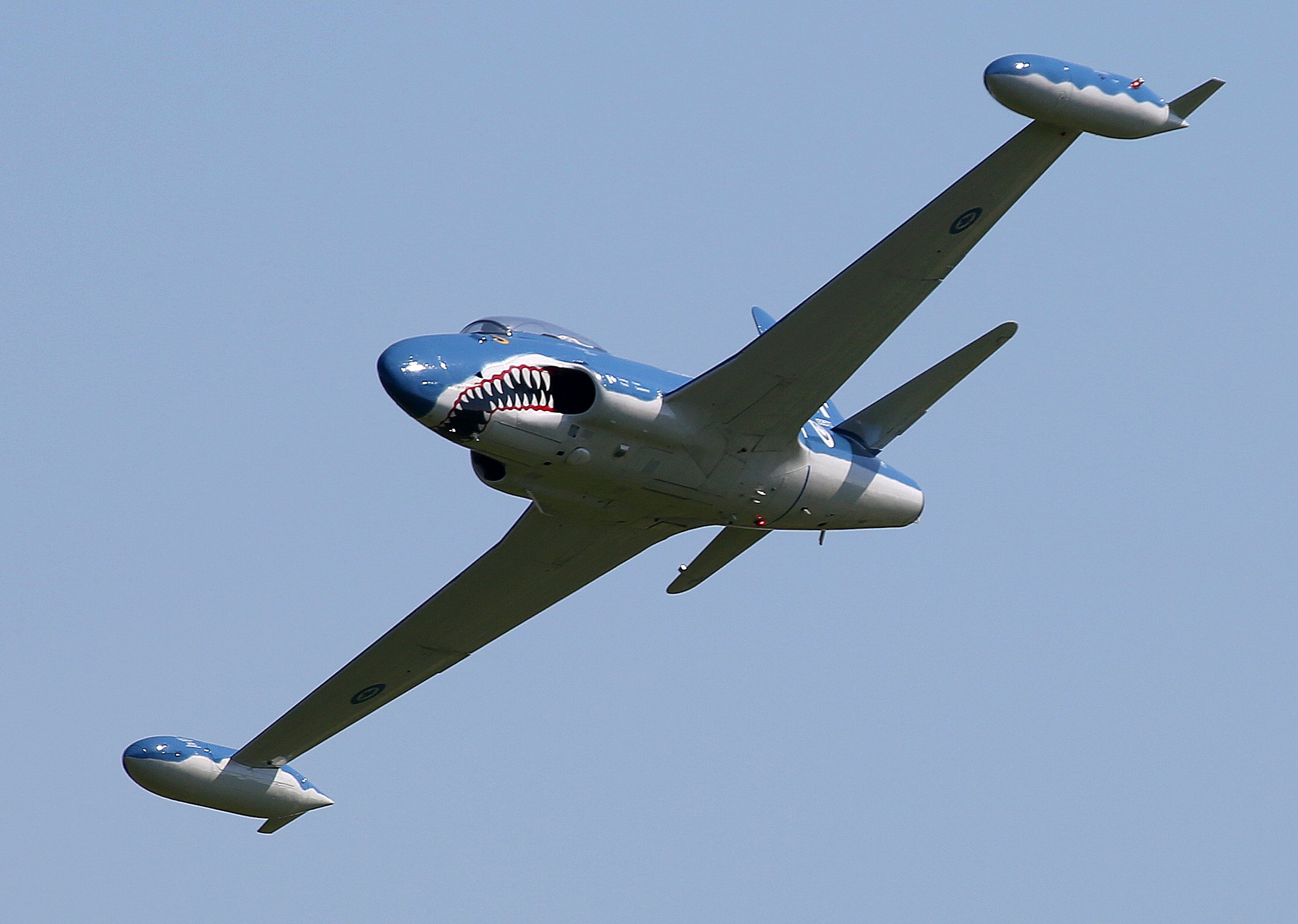 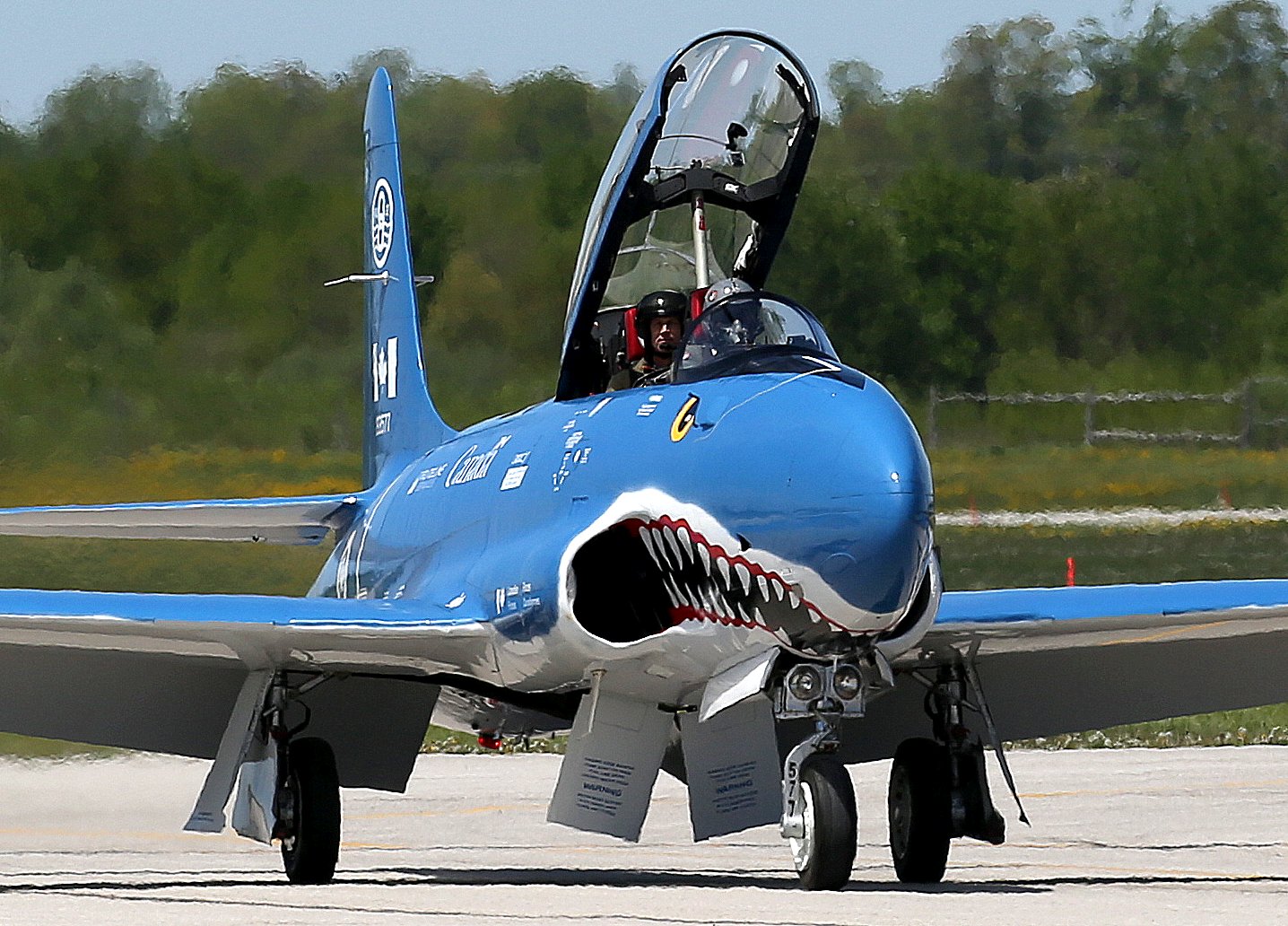 On a recent passenger flight from Waterloo Airport, and after landing and returning to the hangar, Ray described this particular sortie. “Passengers enjoy the low passes. The fastest pass I did into the wind this morning was at 300 knots and then, after extending the speed brakes and pulling back the power, turned onto the downwind with an almost 90 degree bank with 2 ½ Gs before leveling off”. He continued, “I have to get approval from the tower to fly the low 300 plus knot passes. This is a matter of safety. If you are going in low and slow for a pass down a runway at say 200 knots, and something happens to the engine, you are not going anywhere but down. However, by always having enough energy on a low pass, I can pull back and balloon up to 165 knots and have a chance to land on one of the runways. That’s the whole purpose of talking to the tower and letting them know what your “minimal safe speed” is, so if you lose the engine, for any number of reasons, you have a chance to recover”.

Ray performs rolls, but not loops, with a passenger in the back seat. “The T-Bird is a relatively easy aircraft to roll because of its center line thrust that allows it to rotate around its axis. It’s a heavy aircraft so when performing loops it requires a lot of speed, at least 380 knots, and altitude to safely enter a loop. It also has a slick profile so if you point it down it’s going to go down very quickly …. it’s not dirty by any stretch of the imagination”. 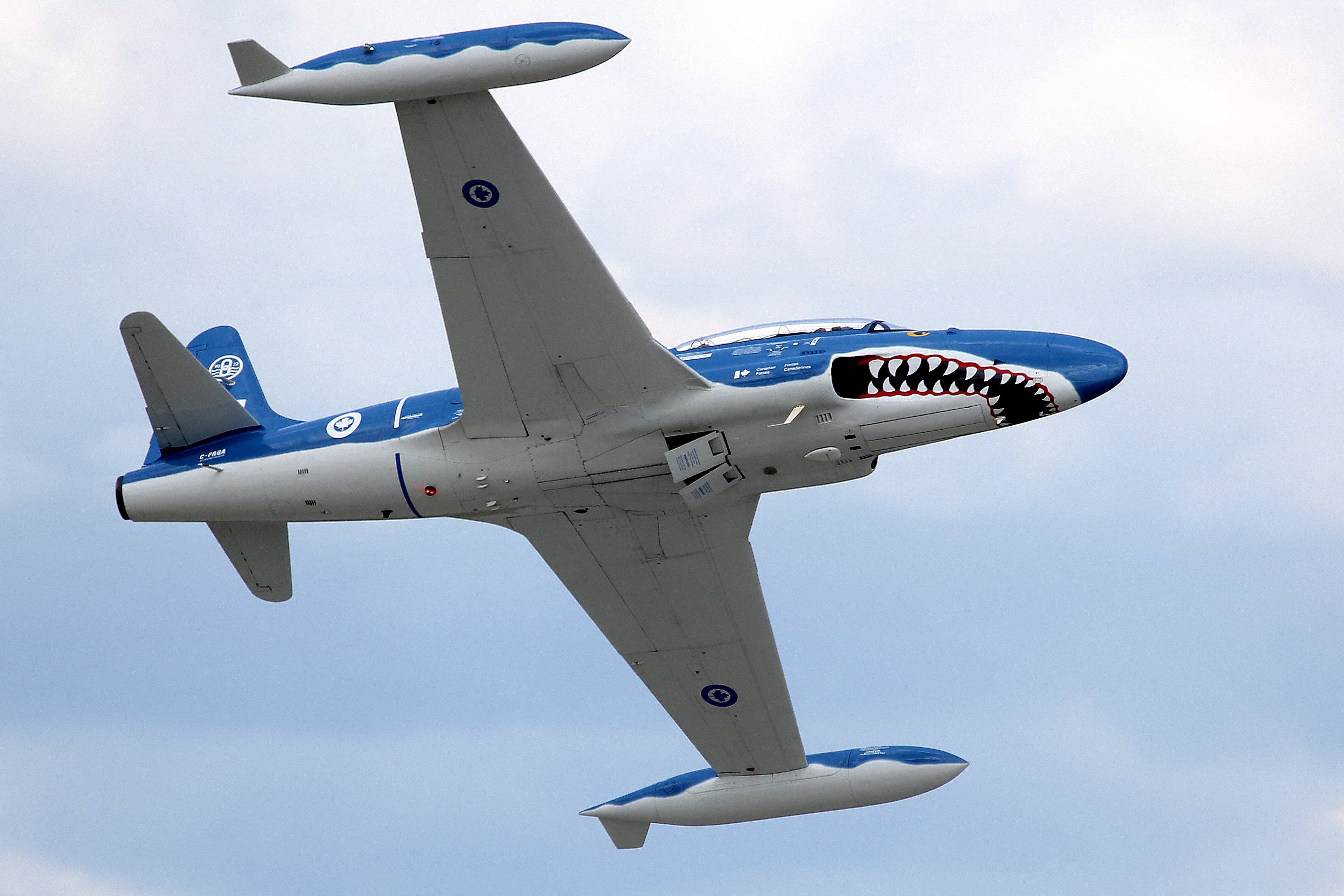 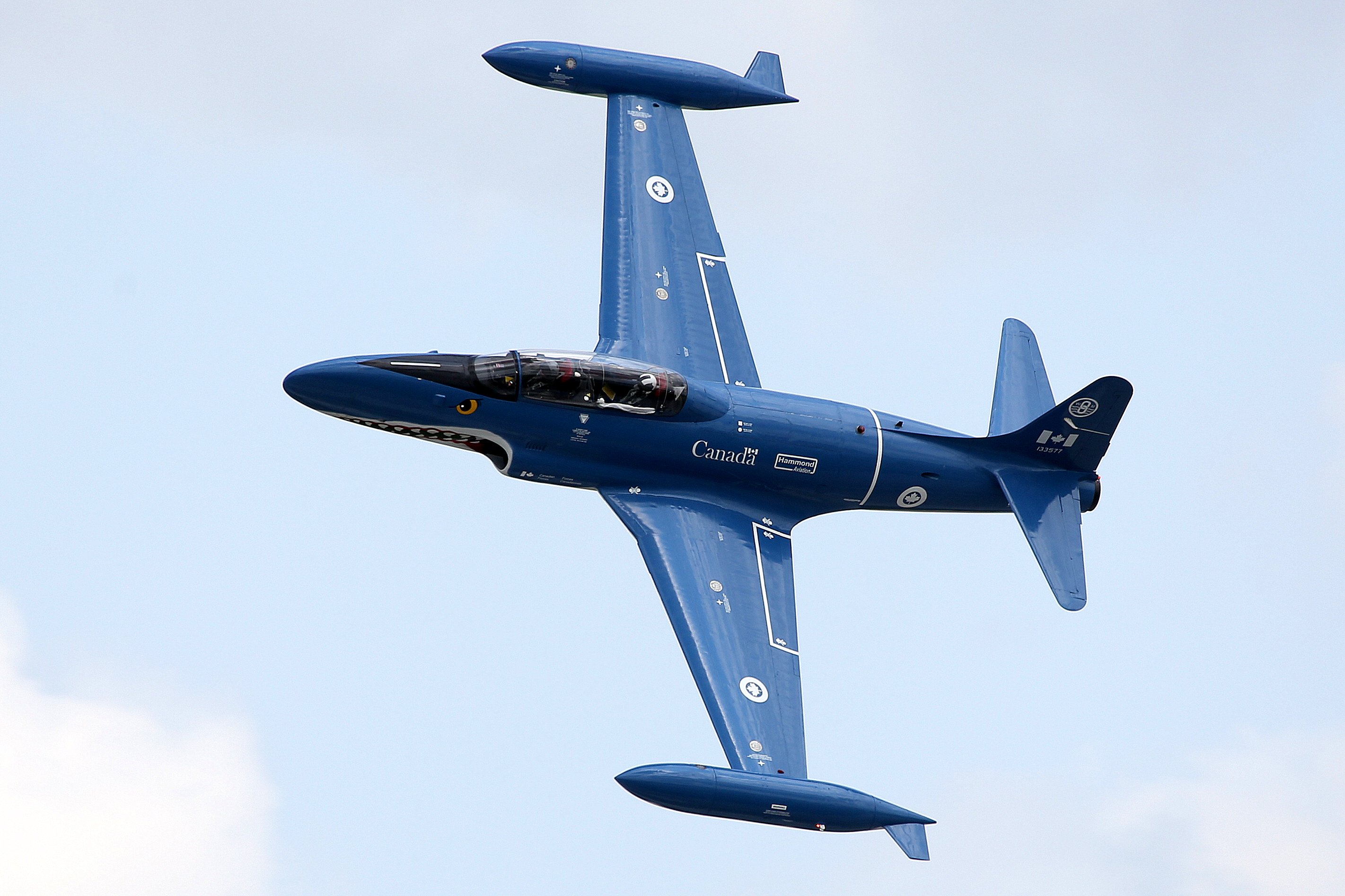 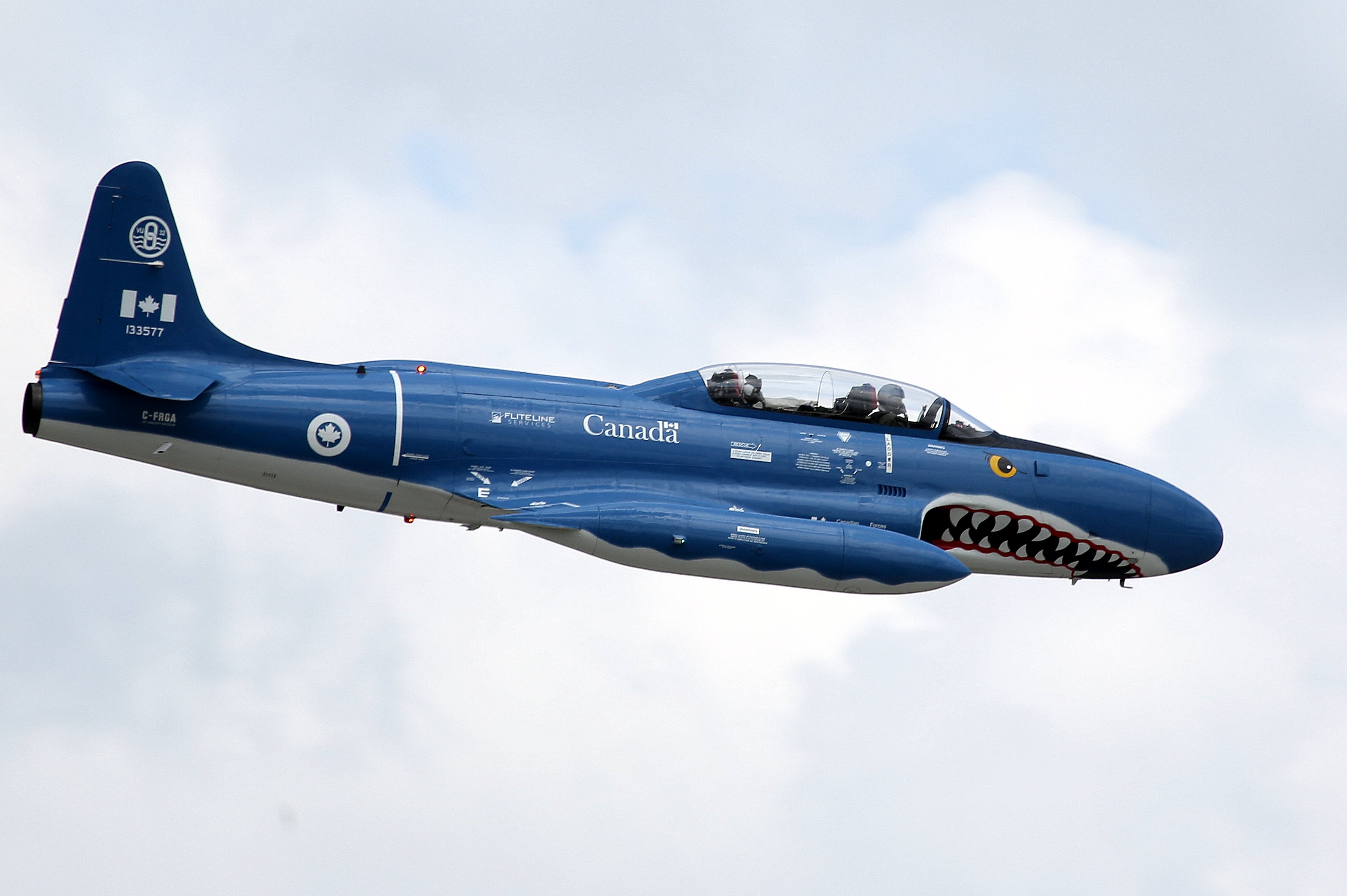 We also chatted about Air Shows and the “Mako Shark”’s routine in them. “When performing at an airshow we generally have a 12-minute window which starts with a take-off and a dumbbell turn-a-round followed by a banana pass. We come around at approximately 300 knots at 200’ so we can display the aircraft and then roll up into no more than a 60 degrees of bank. Next, we’ll come in for a 380 knot high speed pass and then go up into a mid-field break when we are just in front of the crowd. When we do this we like to put on the power and make lots of noise”. 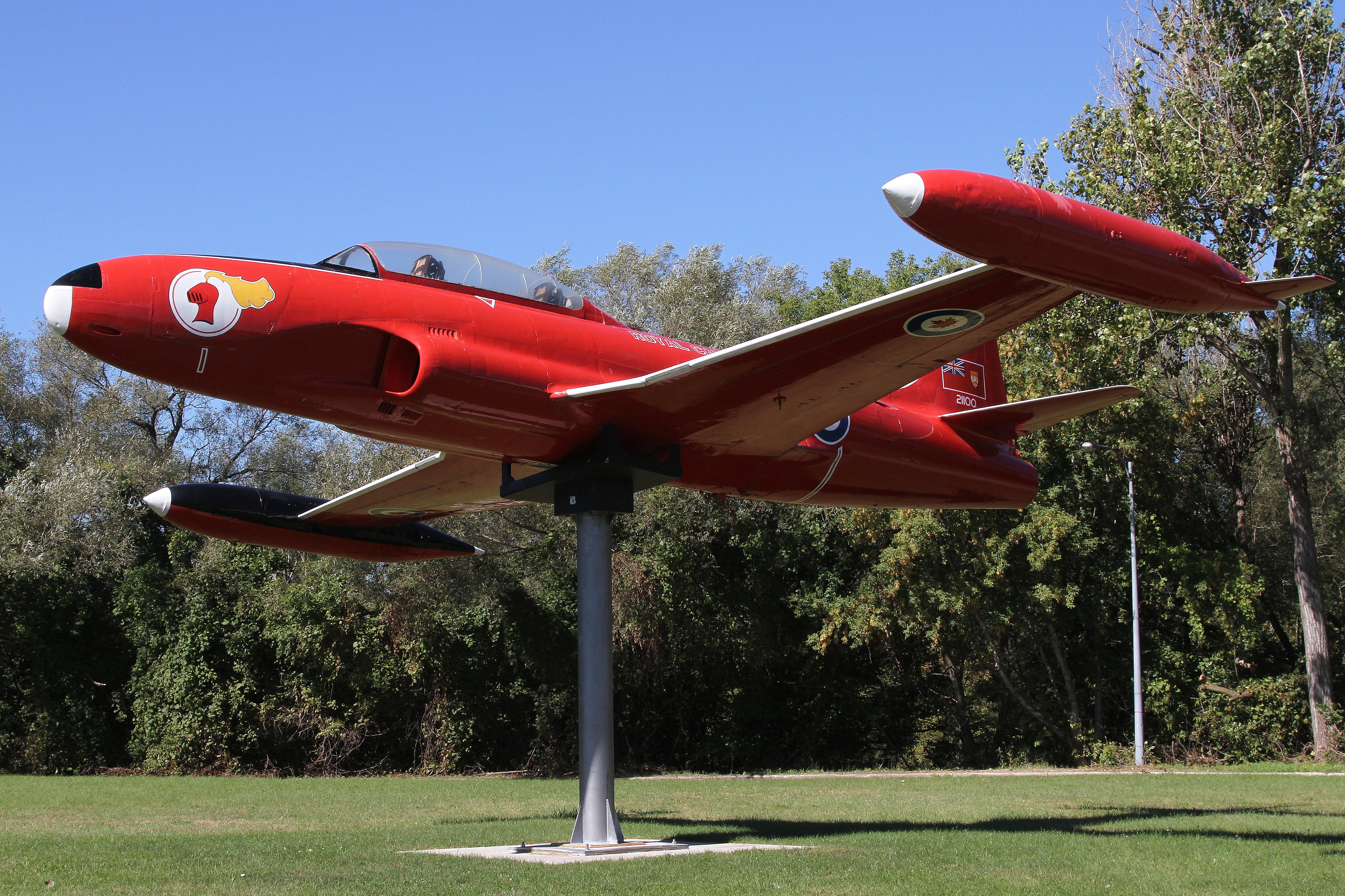 The “Mako Shark”’s aerobatic display carries on a tradition that started almost 60 years ago when the RCAF painted a CT-133 Silver Star in a brilliant red paint scheme and dubbed it the “Red Knight”. For over ten years the “Red Knight” dazzled North American crowds with its thrilling solo aerobatic routines. The “Red Knight” is now mounted on a concrete pedestal at the CFB Borden Military Museum.

In selecting the CT-133, the Waterloo Warbirds not only acquired one of the most successful jet trainers of all time, but an aircraft with a long and distinguished jet training legacy with the Canadian Forces. Now that 2017 marks Canada’s 150th birthday, and the CT-133 Silver Star has been flying in Canadian skies for a significant amount of that time, it is particularly fitting that the “Mako Shark” is continuing to thrill crowds as it honors the men and women who have served the country since its Confederation.

The author would like to thank Waterloo Warbirds’ Team Coordinator Ramona Ostrander and Pilot Ray Thwaites for their assistance and cooperation in making this article possible.