For the majority of people in the United States, autumn signifies cool temperatures, multi-colored foliage, and the gateway to winter. For residents of the Southwestern U.S., more specifically, Arizona, autumn signifies the start of some ideal weather for aviators and aviation fans alike.

To celebrate and embrace this season, several aviation-related events take place in the Southwestern U.S.. One of these events takes place in October and is hosted by the Casa Grande Municipal Airport in Casa Grande, Arizona. This event is the Copperstate Fly-In. 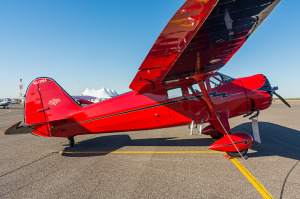 A 1937 Stinson SR-9B Reliant basks in the morning sun

The Copperstate Fly-In began in 1973 and has grown to be the largest fly-in in the Western U.S. and the fourth largest fly-in in the U.S.. A fly-in differs from an air show in that there are no headline performances. Aircraft simply fly in, visit for a while, then leave. According to Wikipedia: “a fly-in is a pre-arranged gathering of aircraft, pilots and passengers for recreational and social purposes”. For visitors, a fly-in is a chance for people to mingle with the aircraft, pilots, and fellow aviation enthusiasts. While some pilots may choose to do some “show passes” for the crowd, you will not see the typical demonstrations you would see at air shows. What you will see, is a close look at some terrific aircraft.

The Copperstate Fly-in is one of the best fly-ins in the U.S., so this year’s visitors got to take part in something special. Hundreds of aircraft from all over the southwest and other parts of the country gathered for this three-day event. The Copperstate Fly-In took place from October 23rd through October 25th, 2014. While the 95-97 degree temperatures made it a little rough on visitors, the clear skies and mild winds in Casa Grande, AZ set the stage for a great aviation event.

Where these types of fly-ins, and, more specifically, the Copperstate Fly-In, excel can be described with the term: intimacy. Visitors were given an intimate look at the aircraft, aviators, and vendors, while mingling with fellow aviation enthusiasts. Spectators could mingle, get up-close-and-personal with the aircraft, and chat with the owners and pilots of the aircraft. Photographer could take photographs of the aircraft arriving, departing, or parked without needing professional equipment.

Much can be said for the military and commercial aircraft of today, but many of the aircraft participating at the Copperstate Fly-In represent the heart and soul of aviation through the ages. Many of the aircraft that attended were small privately-owned aircraft with a few commercial examples mixed in. Some of the aircraft dated as far back as 1937 through more modern examples of recent builds. Some of these aircraft are piloted by former veterans and current and former pilots of today’s commercial jets. Regardless of the background, most pilots were willing to talk about their aircraft and share their stories.

Whether you are an aviation enthusiast, aviation photographer, or someone looking for something to do on a weekend, the Copperstate Fly-In had something interesting for everyone. I suggest you mark your calendar to look ahead for the 2015 Copperstate Fly-In…I know I will.