hough the 30th Anniversary celebration of the Canadian Harvard Aircraft Association took place under threatening skies and frequent downpours they did nothing to reduce the significance of the event; that an all-volunteer, grassroots aviation organization had attained an auspicious milestone …… 30 years of age and still thriving! An organization that has successfully undertaken its mission “to acquire, preserve, restore, maintain, and display the Harvard and all other aircraft associated with the Royal Canadian Air Force and the British Commonwealth Air Training Plan (BCATP)”.
The Harvard 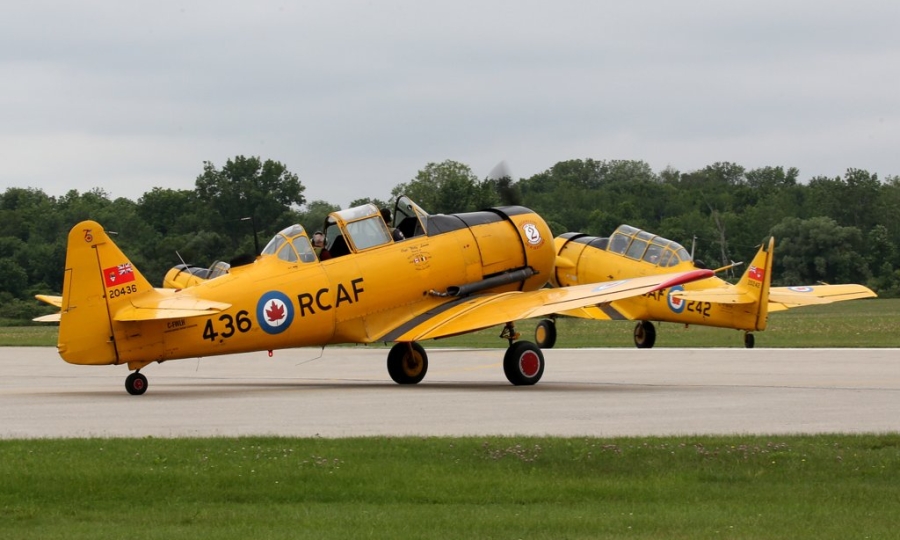 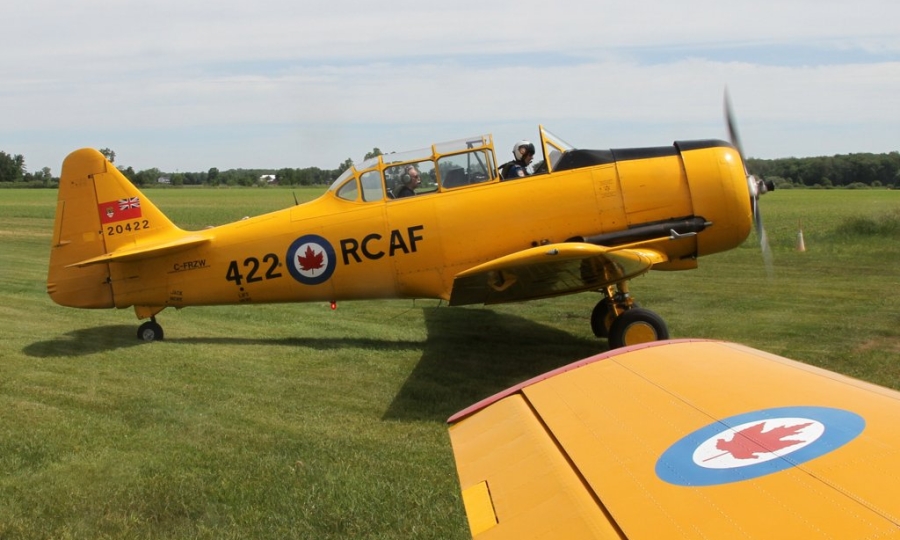 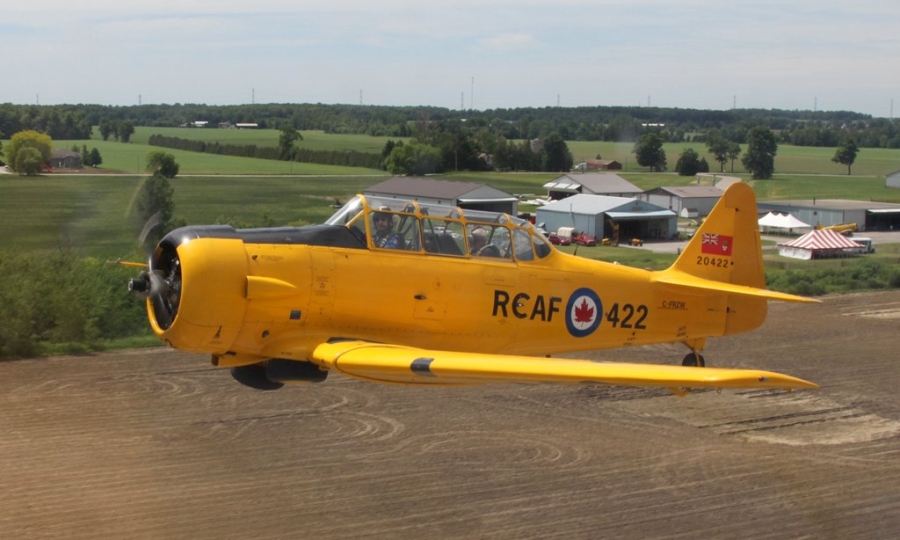 The Harvard is a single-engine, advanced trainer that was designed and produced in the US by North American Aviation in the 1930’s and designated as the AT-6 Texan.  It was best known outside the US as the Harvard which, with its distinctive yellow paint, quickly achieved its reputation as a versatile, robust training aircraft when it was selected as the advanced single-engine trainer for the British Commonwealth Air Training Plan (BCATP).  It has probably trained more pilots than any other aircraft in the world.

As Pat Hanna, President of the Canadian Harvard Aircraft Association in Tillsonburg, Ontario, Canada said, “From the humble beginning thirty years ago, we now own free and clear eight Harvards, a Yale, a Tiger Moth, two hangars and two portable meeting rooms”. 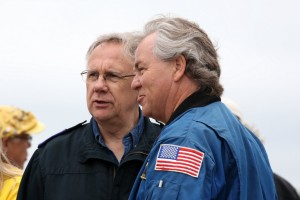 It all began in late 1984 when nineteen aviation enthusiasts met at the Woodstock Flying Club to discuss the possibility of forming an “umbrella” organization to take the four privately-owned “Woodstock Harvards” under its wing.  These enthusiasts, dedicated to the preservation of our Canadian aviation heritage and history, then formally created CHAA in 1985 and their continuing story has become a textbook example of how an all-volunteer organization can transform its dream of keeping the legend of the Harvard aircraft alive into reality.

Two of these founding fathers, Bob Hewitt and Len Fallowfield, participated in a “storytelling” session on Sunday and marveled at the remarkable growth and state of the association today.  They also brought along some fascinating stories which included the narrative of how the late Norm Beckham flew the first CHAA-owned Harvard solo, from Norwich to Woodstock without ever having been checked out on a Harvard.

When CHAA Director Terry Scott stated that “It’s truly the passion of our membership that keeps us alive”, it reminded me how very expensive it is to operate and fly vintage warbirds. When it costs up to $50,000 for an engine rebuild, $75,000 for a new hangar at Tillsonburg Airport, $1500 for each parachute, or even $3000 + for a minor propeller overhaul, it’s evident that the membership has had to assume a huge responsibility for the financial good health of the organization.

Since this is an all-volunteer organization, the cost of “doing business” and supporting everything from general maintenance, restoration programs, insurance and flying the aircraft has to born through fund raising activities.  And this has been done successfully for the past 30 years during which time the volunteers have been running every activity imaginable from bingo nights, barbeques, garage sales and Wings and Wheels events to raise the necessary funds.

A wonderful example of their creativity is shown with the Harvard Mk IV CF-UFZ “Bessy” and their project to raise at least $40,000 to paint it in the distinctive yellow colour of the British Commonwealth Aircraft Training Program. They now have a fund raising campaign under way where you can sign your name on the fuselage of “Bessy” for $20.  Quite a few names have already been written on the fuselage, so perhaps the new paint job isn’t too far away.

One of the most popular fund-raising activities at CHAA Open Houses is the opportunity to go for a backseat ride in one of the Harvards. This weekend’s celebrations proved to be no exception as the Harvards kept taking to the skies, either as single ship or two ship flights, with their “backseaters” being treated to a thrill-of-a-lifetime. On Saturday afternoon we even saw a veteran RCAF airman, 90-year-old Russ Moseley of Midland, Ontario, who was a Harvard flight instructor in the BCATP from 1942 to 1945, return to the air in a Harvard for the first time in 70 years.

If you wish to fly in a CHAA Harvard you must wear a parachute.  Needless to say, it’s a popular spectator sport to watch the backseat fliers strap on their 35 kg parachutes prior to clambering onto the wing and then leg-over the fuselage into their rear cockpit seats.  All, of course, with the assistance of a cooperative ground crew.  I remember a backseat flight in the Harvard when I was so tightly strapped into my parachute harness that I had great difficulty in turning around to photograph the other Harvard on our wing.

Another highlight for me was to be able to get to within 50 metres of the active runway, along with other photographers, to capture the take-off and landings of the Harvards. The chance to photograph them close-up and to hear and feel the distinctive roar from their 600 horsepower Pratt & Whitney radial engines as they flew by was a guarantee to raise our pulse rate.

Two of the aircraft from the Canadian Harvard Aerobatic Team also took to the air on their way to a nearby event. 2000 was the first official year for the Canadian Harvard Aerobatic Team, created as a flying tribute to the veterans of World War II, to participate on the Air Show circuit.  Since then, the Team has continued to perform aerobatics and tight aerial sequences in numerous Air Shows all across North America and has earned an enviable reputation for the quality of its performances.

As I was standing on the ramp, watching the elegant North American NA64 Yale C-GLJH being towed into the maintenance hangar, it occurred to me that this stunning aircraft was the metaphor for the Association. It was, in fact, a trophy of volunteerism. It had taken nearly 25 years of continuous work by countless volunteers, many of whom are no longer alive, to restore it from the ground up to its current perfect flying condition. In fact, in 2013, Yale 3399 received the “Excellence in Restoration” award from the Canadian Aeronautical Preservation Association for “the restoration of an aircraft with special significance to the history of aviation in Canada”. What an honour for the CHAA Restoration Team!

Now, after 30 years of incredible dedication, perseverance and hard work by its volunteers who all share an interest in Canadian vintage aviation, this fledgling association has morphed into a registered, non-profit, charitable organization with a Class B Museum designation, over 700 members and an enviable international reputation. What a legacy to leave for future generations of aviation enthusiasts.

Note: A tip of the hat to CHAA for, although it is justifiably proud of its 30 years of preserving aviation history, it is already looking forward to 2035 and its 50th Anniversary. This will be the occasion when the Time Capsule, containing CHAA memorabilia contributed by its members, is opened. And, the icing on this cake at that moment in time will be that their Harvards are still flying and CHAA will be gearing up to help celebrate the 100th Anniversary of the Harvard in Canadian skies!

Aviation Photography Digest would like to thank Terry Scott, Director & Public Relations and Pat Hanna, President CHAA for their assistance.