“Having previously served in VMA-214 and flown the AV-8B for many years, the Black Sheep and the Harrier hold a special place in my heart,” said U.S. Marine Corps Maj. Gen. Bradford J. Gering, the commanding general of 3rd Marine Aircraft Wing. “As 3rd MAW says a bittersweet farewell to the Harrier, we are excited to increase our number of F-35B squadrons with the re-designation of VMFA-214.”

VMA-214 was initially commissioned 80 years ago as Marine Fighter Squadron (VMF) 214 on July 1, 1942, on Oahu, Hawaii, flying the F-4F Wildcat before transitioning to the F4U-1 Corsair. The squadron completed two combat tours under the previous call-sign “Swashbucklers” before reforming as the “Black Sheep” under the leadership of U.S. Marine Corps Major Gregory “Pappy” Boyington. 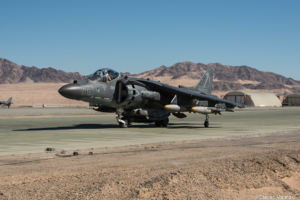 In August 1943, a group of twenty-seven young men under the leadership of Major Boyington joined together to form the original “Black Sheep” of VMF-214. Major Boyington had just returned from a year’s tour in China as a member of the American Volunteer Group, “The Flying Tigers.” In China, he had downed six enemy planes and became, through actual experience, one of the originators of American fighter tactics against the Japanese.

The call sign “Black Sheep” was chosen by the squadron to commemorate the unusual way in which the Squadron had been formed highlighting the pilots’ varied experience levels. The pilots ranged from experienced combat veterans, with several air-to-air victories to their credit, to new replacement pilots from the United States.

Major Boyington and Major Stan Bailey were given permission to form these unassigned pilots into a squadron, with the understanding that they would have less than four weeks to have them fully trained and ready for combat. They were very successful and Major Boyington was later awarded the Congressional Medal of Honor for his efforts with VMF-214 becoming the first Marine fighter squadron awarded the Presidential Unit Citation for extraordinary heroism in action.

On July 9, 1957, the squadron was re-designated VMA-214 as the Black Sheep transitioned to flying fixed-wing attack aircraft. In Vietnam, the Marines of VMA-214 distinguished themselves as an attack squadron, flying the trustworthy A-4 Skyhawk from expeditionary airfields in Chu Lai. The Black Sheep continued to fly the A-4 until 1989 when they transitioned to the AV-8B Harrier II, this also marked the introduction of the “Night Attack”  variant of the Harrier aircraft into USMC. 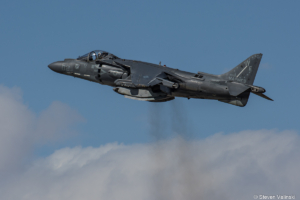 VMA-214 became the first squadron to utilise the Night Attack capability in October of 1991 by deploying 20 Night Attack Harriers to MCAS Iwakuni for seven months. Continuing their tradition as pioneers, in July of 1993 the Black Sheep conducted a dedicated Night Systems deployment to 29 Palms, California. This deployment was designed to chase the moon and fly around the lunar schedule. Ultimately, sorties were conducted throughout the night until shortly before dawn over a period of three weeks. It resulted in the gathering of original medical data on night flying and its effect on pilot performance.

Over the next 30 years, the Black Sheep participated in combat operations throughout the globe, including Operation Restore Hope, Operation Iraqi Freedom, and Operation Enduring Freedom. Most recently, VMA-214 completed its final AV-8B deployment with the 11th Marine Expeditionary Unit, during which they participated in Operation Inherent Resolve.

“The re-designation of VMA-214 to VMFA-214 is the end of a legacy for the Black Sheep and Marine Aircraft Group-13,” said U.S. Marine Corps Lt. Col. Keith Bucklew, the outgoing commander of VMA-214. “This symbolic event finalizes the sundown for Harriers on the West Coast and closes the chapter on 58 years of attack aircraft operations for the Black Sheep.

“Finishing this mission with a successful 11th Marine Expeditionary Unit deployment is a testament to the viability and performance of the Harrier over the last 33 years and, more importantly, the talent of the Marines who managed them,” added Bucklew. “The AV-8B will be missed in the skies of Yuma, but it is time to transition to the next generation of fighter attack aircraft.”

“The F-35’s fifth-generation strike fighter capability brings more lethality and flexibility to combatant commanders than any other fighter platform,” said U.S. Marine Corps Lt. Col. Christopher Kelly, the commanding officer of VMFA- 214. “The STO/VL capability inherent in the F-35 “B” variant allows the Marine Corps to operate expeditiously and from remote locations, making the model uniquely qualified at supporting expeditionary advanced base operations.” 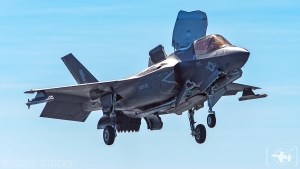 3rd MAW continues to “Fix, Fly and Fight” as the Marine Corps’ largest aircraft wing and remains combat-ready, deployable on short notice, and lethal when called into action

To this day, the Black Sheep of VMA-214 have continued in their tradition of true and faithful service to the Nation and to the Corps. They have continued to produce and maintain a highly skilled and tactically proficient cadre of pilots and maintainers. From the time of “Pappy” Boyington to the present day, the Black Sheep have demonstrated a standard of excellence and esprit de corps that has marked them as one of the finest military units of our Country and Corps. 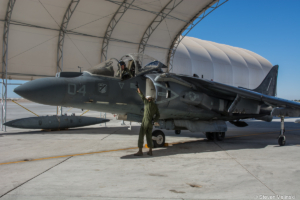