“Knighthawks” over the Mediterranean!

A B-52H Stratofortress from the 69th Expeditionary Bomb Squadron conducts mission along side United States allies in the Middle East and Europe.

Coalition and regional partner air forces joined a U.S. Air Force B-52H Stratofortress from the 69th Expeditionary Bomb Squadron nicknamed the “Knighthawks”, and two F-22 Raptors from the 1st Fighter Wing on a presence patrol mission across the U.S. Central Command area of responsibility (AoR) of Europe and the Middle East on March 29th.

The Stratofortress (Serial number: 61-0039) that took part in the mission is one of four currently deployed to Royal Air Force Fairford, England. The aircraft flew over the East Mediterranean, Arabian Peninsula, and Red Sea before departing the region and returning to Fairford.

“With each bomber task force mission, AFCENT and partner air forces demonstrate the strength of regional airpower,” said Lt. Gen. Greg Guillot, Ninth Air Force (AFCENT) commander. “An unprecedented nine countries flew with our B-52 today, so this mission clearly signaled our ability to quickly bring forces to the theater and operate seamlessly with our partners during a training event that signals our combined commitment to regional stability and defense.”

The non-stop B-52H mission included fighter escorts from the Royal Air Force participating with FGR.4 Typhoons and regional partner nations such as the Czech Republic flying along side the B-52 with a pair of JAS-39C Gripen’s and Italian Air Force Typhoons, enhancing regional stability and security through a show of combined strength and capability.

The flow of airpower throughout theatre during this presence patrol was significant due to the addition of F-22s, which deployed from Joint Base Langlet-Eustis, Virginia to the USCENTCOM AOR in February and deployed to Al Dhafra in the United Arab Emirates.

According to the U.S. Air Force, the F-22 Raptors deployed to Al Dhafra , and participated in Operation Agile Spartan II and conducted Agile Combat Employment concepts throughout the U.S. Central Command area of responsibility, which showcased U.S. Air Force’s flexibility to operate from any location in a contested environment.

Last time USAF F-22 deployed to UAE was when 12x Raptors operated from Al Dhafra Air Base between May and October 2018 as part of a pre-planned rotation to the Gulf. More recently, at the end of June 2019, 12 F-22 Raptors belonging to the 1st Fighter Wing and the 192nd Fighter Wing of the Virginia Air National Guard, both from Joint Base Langley-Eustis, Virginia, deployed to the AFCENT AOR, to respond to a short-notice deployment request. Back then, the F-22 did not deploy to UAE but to Al Udeid, Qatar for the first time “to defend American forces in the region.”

The B-52H and their aircrew are assigned to 5th Bomb Wing, Minot Air Force Base, North Dakota, and flew the mission under Air Force Global Strike Command’s bomber task force mission-set and deployed to England before the Russian invasion of Ukraine.

Since then regular flights of B-52’s have been noted on the App Flight Radar 24, where B-52’s have been patrolling the skies over Eastern Europe. USCENTCOM, through Ninth Air Force (AFCENT), has facilitated two bomber task force missions in 2022 as a demonstration of the U.S.-led coalition’s commitment to promoting regional stability. The last bomber-led mission across the Central Region involved one B-52H and occurred Feb. 14, 2022. 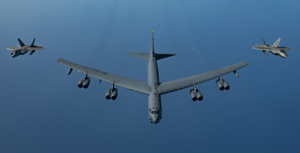