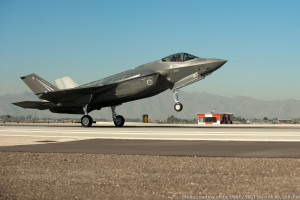 On March 10, 2014, Luke Air Force base received it’s first F-35A designated for the reactivated 61st Fighter Squadron (61 FS). Recently, another milestone was reached when the first international F-35A arrived at Luke AFB. On December 18, 2014 the first Australian F-35A (A35-002) arrived, followed by a second F-35A (A35-001) which arrived on December 22, 2014. According to Brig. Gen. Scott Pleus, Commander of the 56th Fighter Wing: “Australia is the first of 10 nations that will not only become part of the Luke community, but will share in calling the West Valley (just outside Phoenix, Arizona) a home away from home.” According to Royal Australian Air Force (RAAF) Air Commodore Gary Martin, RAAF Air Attaché to the U.S.: “this is a 30 year partnership that we are just starting here”. The RAAF expects to have 12 aircraft overall at Luke and train along with the 61st FS.

Located just outside Phoenix, Arizona, Luke Air Force Base’s mild year-round temperatures and close proximity to a number of bombing/gunnery ranges make it an ideal location for training on the Lockheed-Martin F-35A Lightning II JSF. Eventually, 144 F-35A’s are expected to be assigned to Luke AFB.