According to the Davis-Monthan Air Force Base Public Affairs Office, “Angel Thunder is the world’s largest personnel recovery exercise, integrating sister services and numerous state, national, multinational and inter-agency assets dedicated to saving lives in incredible circumstances”. Simply put, what Red Flag is to aviation combat training, Angel Thunder is to Combat search and rescue (CSAR) and standard search and rescue (SAR) training. The 2014 Angel Thunder exercise takes place from May 4-17, 2014 and, according to the Davis-Monthan AFB Public Affairs Office, “will involve over 1,800 personnel from all of the services, 23 non-military agencies, eight international partners, over 70 aircraft, and ships from the Carl Vinson Carrier Strike Group, operating across Arizona and off the coast of California”.

Angel Thunder began in 2006 after realization that the standard combat training exercises such as Red Flag and Green Flag were not enough to prepare CSAR groups in the USAF for many of the situations they may be called upon for. What began as a USAF-only exercise, evolved into an exercise that “integrates sister services and numerous state, national, multinational and interagency assets dedicated to saving lives in incredible circumstances”. Angel Thunder is now an annual exercise based out of Davis-Monthan AFB in Tucson, AZ. It is the largest personnel recovery exercise in the world. According to Major Sarah Schwennesen, the head of Public Affairs for Angel Thunder, “It (Angel Thunder) grew from a local exercise at Davis-Monthan Air Force Base and everybody just started getting word of what was going on and then wanted to combine and practice the training together”. For this exercise, a specified area is created utilizing the ranges and open areas of Arizona and, sometimes, the neighboring states. For Angel Thunder 2014, Major Schwennesen stated: “we’re covering basically all the state of Arizona, going off the coast of California, as well, to do missions in open water”. For example, the Barry M. Goldwater Air Force Range is utilized for more hostile scenarios, while the open areas of Tombstone, Arizona are utilized for the wide-open areas for missions where a large number of aircraft may be employed.

An alternate extraction technique is utilized during Angel Thunder 2014

There are many missions and smaller training exercises that take place throughout Angel Thunder. These missions/exercises get progressively more difficult as Angel Thunder moves forward. In the second week of Angel Thunder the missions are more comprehensive and draw on the lessons learned in the previous weeks’ training. One of the training exercises in the first week of Angel Thunder 2014 was called “Alternate Insertion and Extraction Methods”. This simulation focused on inserting and extracting troops using alternative techniques. U.S. Airmen, French Airmen, U.S. Army Rangers and Swedish Rangers were utilized as ground troops for this exercise. After being inserted into a specified area, the ground troops were extracted by two French Air Force Eurocopter EC-725RC Caracals. These impressive helicopters dropped a line and twelve Airmen and/or Rangers harnessed themselves to a single line. After securing themselves, the troop members were flown away. Seeing these large helicopters, with a large rope dangling from them, holding 12 airmen/rangers was an impressive sight. This type of insertion/extraction exercise provides training that can save lives when normal insertion/extraction techniques are not feasible.

Some of the aircraft participating in Angel Thunder include:

Ultimately, what Angel Thunder is all about is saving lives. While, the Red Flag exercise is intended to provide aviators, maintainers, etc… with their first ten combat missions. Similarly, Angel Thunder provides 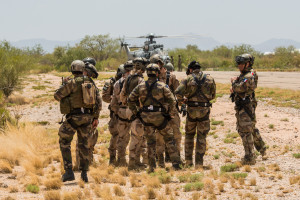 CSAR/SAR personnel with realistic training scenarios to prepare them for when they are called upon. The difference between combat training and CSAR/SAR training is that CSAR/SAR teams are frequently called upon during peacetime in non-combat scenarios. On, May 2nd, a few days before Angel Thunder began, Airmen from the 563rd Rescue Group were called upon in a real world rescue mission. A fire broke out on a Chinese ship 1100 nautical miles off the Pacific Coast. According to DM Public Affairs, “Airmen from the 563rd RQG flew in a 79th Rescue Squadron HC-130J Combat King II for nearly 11 hours, to parachute Guardian Angel teams near the ship. The GA teams parachuted with two inflatable zodiac boat packages and medical equipment, so that they could board the vessel and stabilize the injured sailors”. A few days later, on May 5th, “48th RQS Pararescuemen and the two injured fishermen were hoisted off the Venezuelan skiff into two 55th RQS HH-60G Pavehawk helicopters. The HH-60G Pavehawks and a HC-130J Combat King II flew nine hours over the Pacific Ocean to recover the GA personnel and patients, and conducted four refueling operations on the roundtrip flight from Cabo San Lucas, Mexico. After returning to Cabo San Lucas that evening, the patients were transferred to a 79th RQS HC-130J Combat King II for transport to Naval Air Station North Island, California”.

CSAR/SAR teams are often tasked with saving lives. They often bring hope to situations where there appears to be no hope. The importance of CSAR/SAR cannot be understated. Combat exercises such as Red Flag are now incorporating CSAR/SAR into the exercise because of the value of the additional training. A dedicated CSAR/SAR exercise such as Angel Thunder helps prepare these CSAR/SAR groups by providing realistic scenarios, joint agency/country cooperativeness and experience that is needed to excel at what they do best….save lives.

A special “Thank You” to Major Sarah Schwennesen and Second Lieutenant Erin Ranaweera for allowing me to attend a segment of the Angel Thunder training and for all the information they provided that contributed to this article.