Report and Photos by Jaryd Stock

Apart from supporting aircraft consisting of various KC-135R Stratotankers, C-130H Hercules and C-17 Globemaster III units from the Air National Guard, this deployment from the 129th consisted of two MC-130P’s and two HH-60G Pave Hawks with approximately 200 personnel, with two specialised teams of servicemen known as the Guardian Angels who are the pararescue teams. Guardian Angels are the USAF’s personnel recovery asset, which are comprised of pararescue and combat rescue officers. Their primary role is to be sent out in any situation and recover people anywhere at anytime. “This mission is about the 129th Rescue Wing growing as a whole. When we think of diversity, we think of skin tone or gender. But to me, it’s culture,” said Col. Taft Aujero, 129th Operations Group Commander. “We are growing culturally by doing these joint missions and working along-side our allied military counterparts to become better at what we do.” 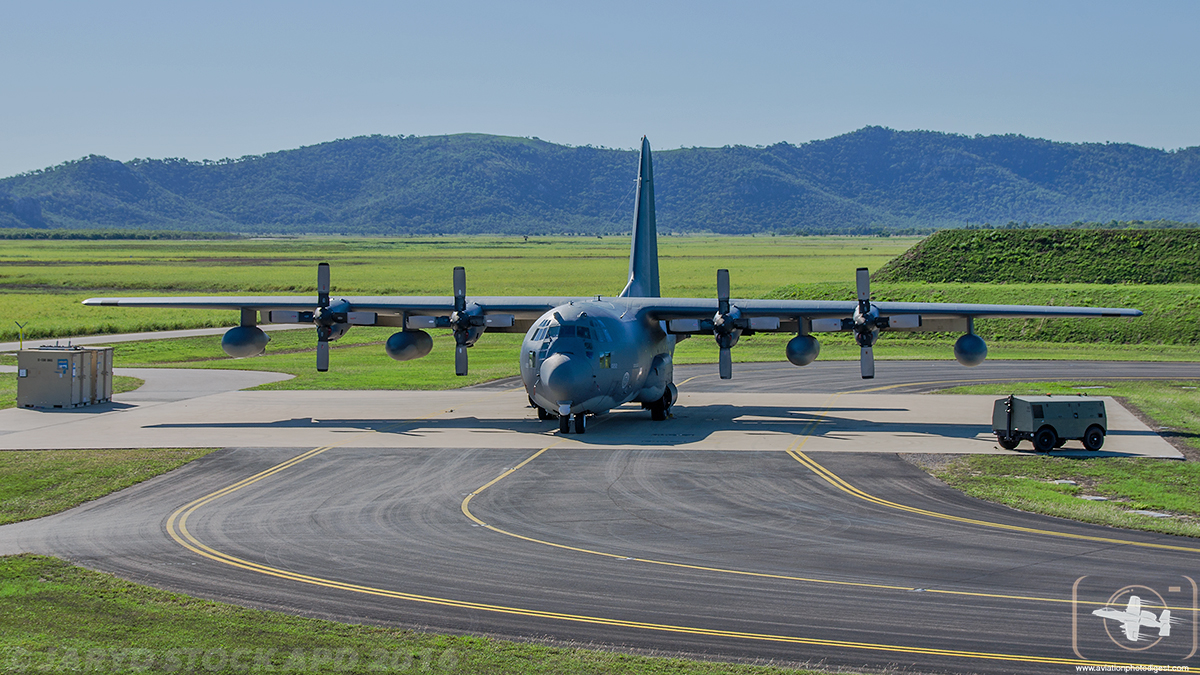 One training mission utilised two HH-60G Pave Hawk helicopters to rescue simulated victims off the coast of Townsville in a scenario that simulated an aircraft that had to ditch into the ocean. Pararescuemen know as the Guardian Angels pulled the simulated victims directly out of the water and administered first aid in the helicopter. RAAF Squadron Leader (SQNLDR) Ashley Hill stated, “We’ve been simulating aircraft crashing in the Coral Sea and then planning and then conducting search operations to find those people, and then launching Helicopters and fixed wing aircraft such as the Combat Shadow’s to drop them life rafts and then recovering them with helicopters such as the Pave Hawks and our S-76’s and winching them to safety”.

After the pararescuemen polished their over-water SAR proficiencies for three consecutive days, the time came later in the first week of the two week exercise to showcase their abilities on solid ground while under enemy fire. During the second week of training planned for the exercise, a focus was made more on Combat Search and Rescue (CSAR) in simulated scenarios the High Ground Combat Survival Training site in the Townsville Field Training Area (TFTA) which is situated in the West from the City and subsequent RAAF Base Townsville.

Personnel from joint teams both United States and Australian, demonstrated their injured personnel recovery capabilities in an hostile urban environment involving an improvised explosive device on a coalition convoy of two cars and simulated paint rounds. In the simulated urban scenario a IED had exploded, and units back at RAAF Base Townsville were radioed in to extract coalition ground personnel that were injured in the roadside attack and in need of medical treatment. Instantly a plan was initiated between the Australian Army, RAAF and members of the 129th back at headquarters at RAAF Base Townsville where a RAAF AP-3C Orion was tasked to overfly the combat area to ascertain conditions or give reconnaissance, provide information on hostiles, and guide the Guardian Angel teams in the HH-60G Pave Hawks on where to insert and extract the injured participants in the mock scenario. The HH-60G crews were to firstly provide a layer of fire around the landing zone where a perimeter was needed to provide a safe area to insert and extract personnel. After flying over the designated area, simulated ground fire from opposing enemies erupted as the HH-60G Pave Hawks delivered the Guardian Angels.  Setting a perimeter around the helicopters was priority for the personnel as they made their way to the convoy to administer first aid to those in need and extract everyone that was apart of that mock explosion. 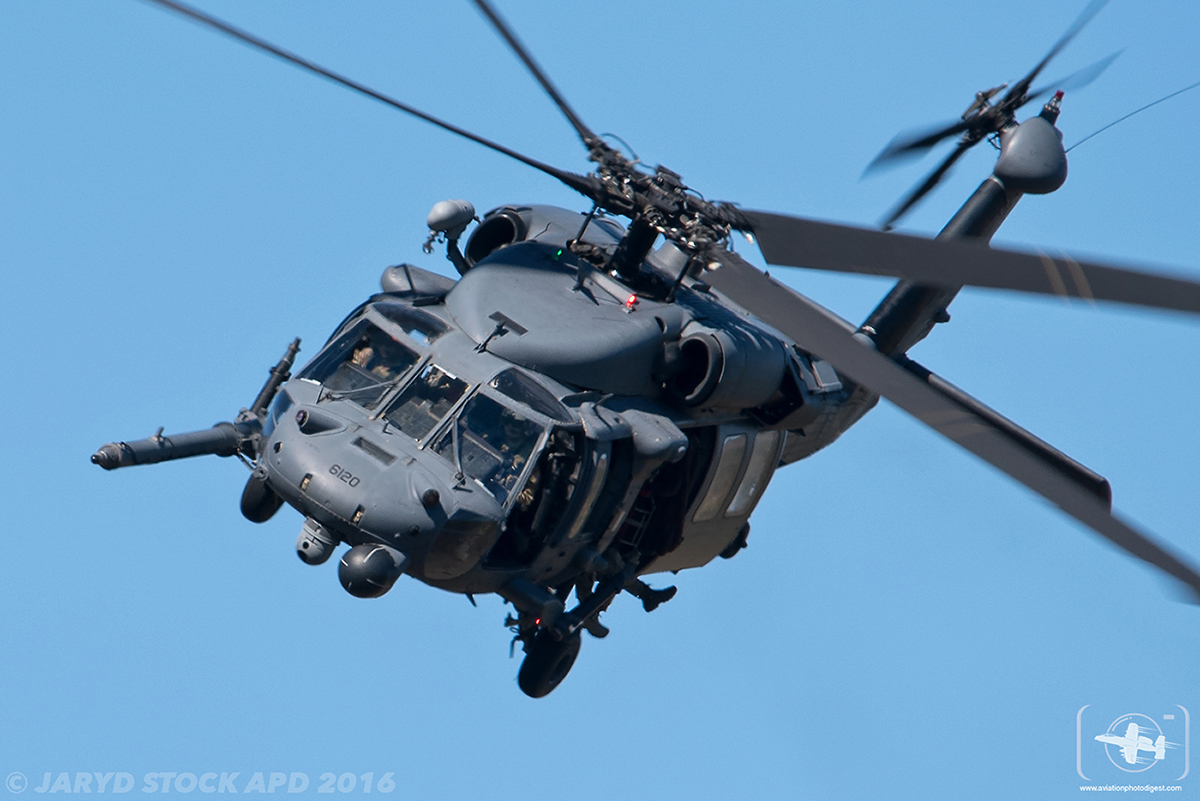 After inserting teams the Pave Hawk’s then provided close air support assisting the ground teams achieve their tasks. Once the ground teams had reached the convoy, cover was laid by sentries that had moved to strategic locations within the urban environment with Pave Hawk’s again providing cover when needed. During this timeframe a single MC-130P Combat Shadow had positioned itself around 2,500 feet and about a kilometre away from the combat area. Due to the unique use of the refuelling capabilities given by Combat Shadow the Pave Hawk then linked up and received fuel so it was able to stay in the fight.

After being signalled by the Guardian Angels that their first extraction was ready, the Pave Hawk had finished its air to air refuelling and headed back to the landing zone. Upon landing, the Guardian Angel teams loaded patients that needed urgent medical attention onto the Pave Hawk. When the Pave Hawks were loaded the helicopters departed the area. Once in the air initial first aid was administered, but due to the nature of attack that was experienced it was realised that high end medical treatment was needed back at a military facility. Part of the initial tasking and planning for this scenario by the teams at headquarters was a secondary MC-130P awaiting the arrival of these patients at a nearby airfield where a dirt airstrip had been constructed in the TFTA. Patients would then be transferred from the Pave Hawk to the Combat Shadow and then flown back to RAAF Base Townsville where medical teams were waiting to conduct advanced medical treatment. 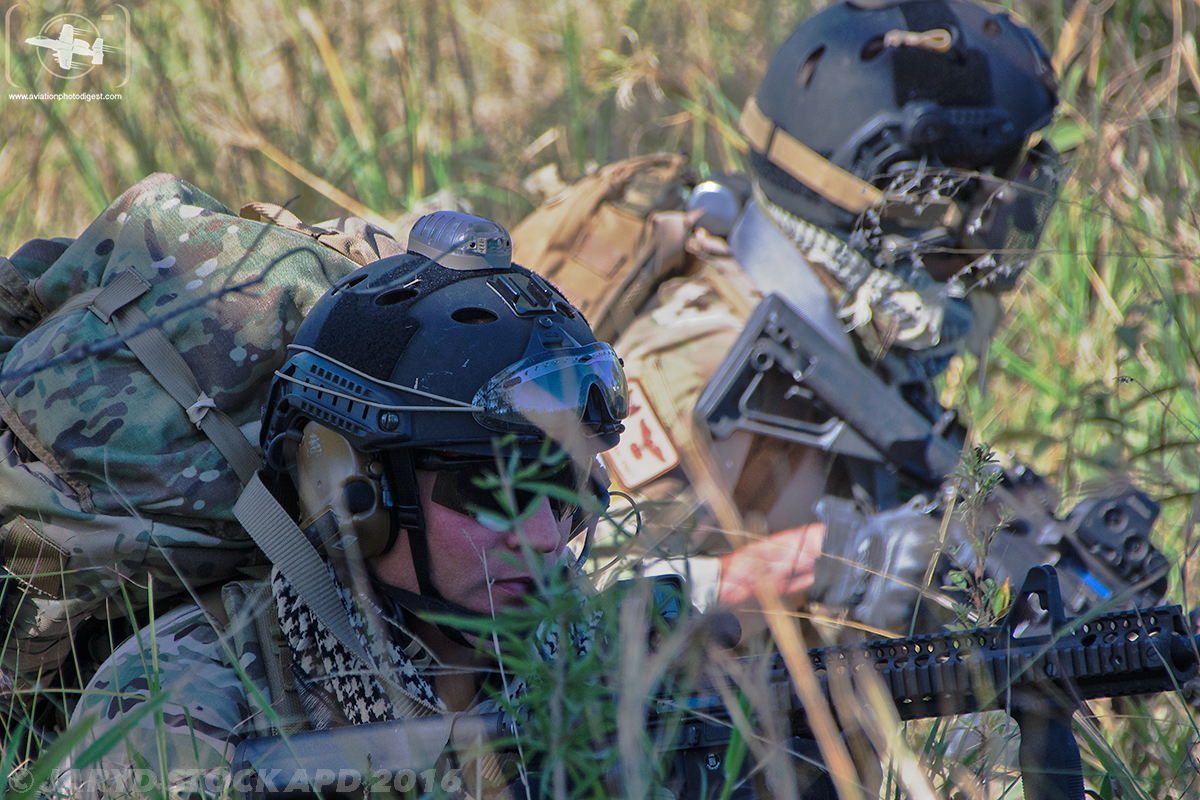 This particular scenario was conducted where the pararescue specialists operated in this intense live fire exercise with simulated multiple causalities were able to land, assess, and safely evacuate patients in under half an hour.

Another scenario was conducted in the errand bushland in the TFTA where a fighter jet had crashed due to being shot down in a hostile area. A RAAF F/A-18F from 1 Squadron participated in this scenario, it was on station to gain communication and provide CAS to simulated aircrew from the downed fighter that had ejected safely. RAAF Sargent Kurt Sayed who is a Combat Survival Instructor stated what the ideal extraction for a downed pilot is, “In this scenario it is essential to gain communication with the fast jets and get them to give that top cover that is needed, and then we hope that, within the hour, coalition forces can arrive and extract downed airmen, as I am simulating at the moment to be extracted within the hour that is a nice timeline before enemy forces advance on my position”.

“Its been great to train here with the Australians, one of our jobs in the military is having that ability to adapt and keep rolling with it no matter what comes up against you and that is one thing that I have been really impressed with the Aussies. All the Australians we have worked with have a great ability to adapt and not become stuck to one plan, and if that plan doesn’t work out they have that ability to work and roll with it” said Senior Airman Matthew Sutterfield, 129th Rescue Wing survival, evasion, resistance and escape (SERE) specialist. “If the plan doesn’t work out, they are always willing to roll with the changes and continue working on a new concept, which is great to see and fantastic to work with.”

AIRCRAFT INVOLVED IN THE EXERCISE:

Not far from the High Ground Combat Survival Training site, the sky above the Great Barrier Reef just off the coast line of the City of Townsville played host to one MC-130P Combat Shadow aircraft exercise, where air to air refueling the HH-60G Pave Hawk helicopters in midflight was undertaken.

“Anytime we can train in different airspaces, or unfamiliar rendezvous, we get the chance to gain new skills and improve our worldwide capabilities,” said Master Sgt. Eric Valdez, an MC-130P Combat Shadow loadmaster.

The four aircraft flew a total of over 50 combined hours, conducting SAR missions and air dispatch of equipment. They were supported by communication personnel and maintenance crews working together, learning more about each section’s capabilities and fighting as a cohesive unit.

“It’s a great opportunity to practice in a new environment and to work our interoperability with our Australian counterparts,” said Sutterfield. 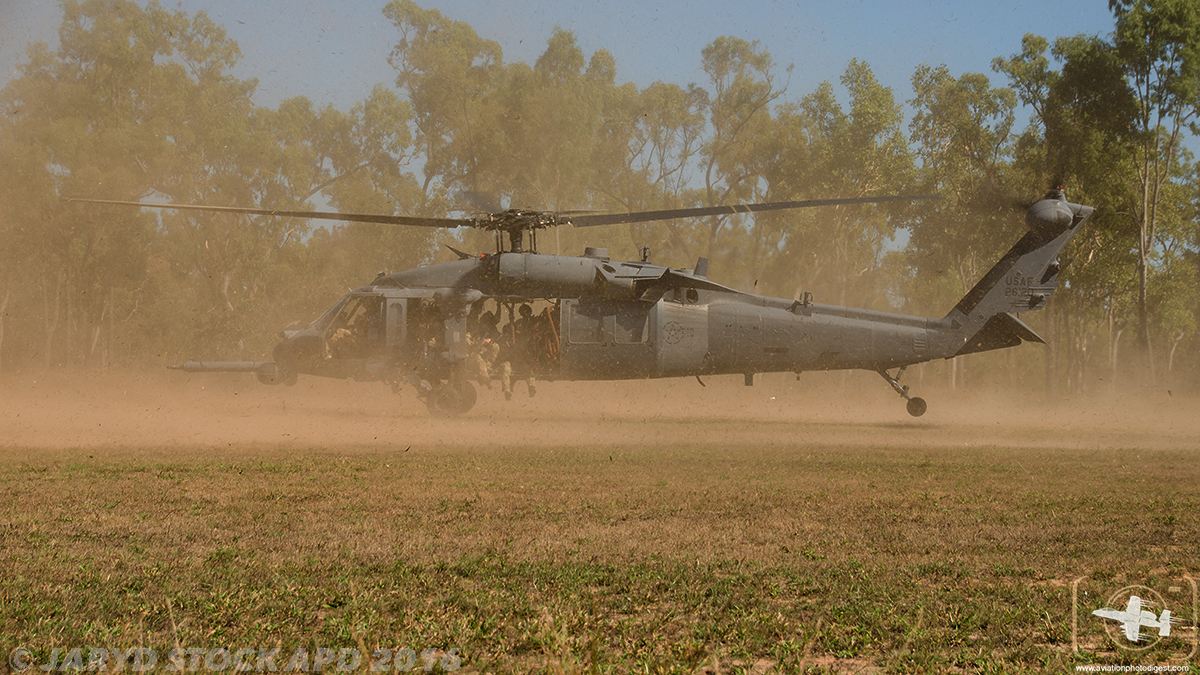 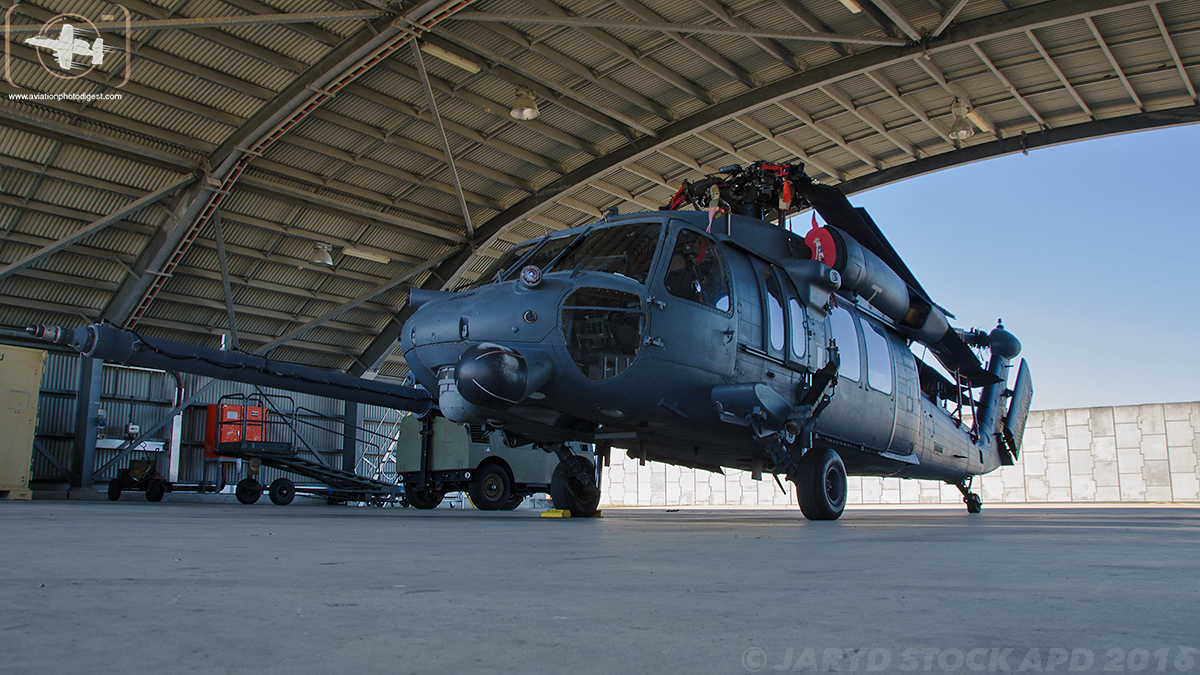 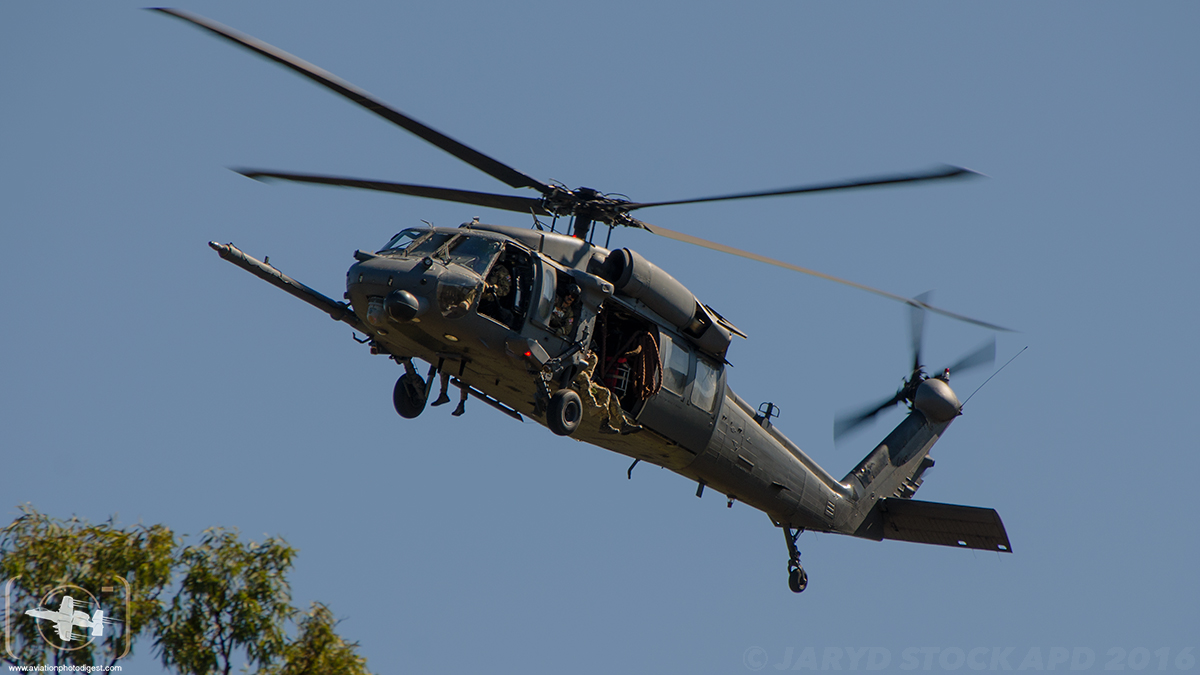 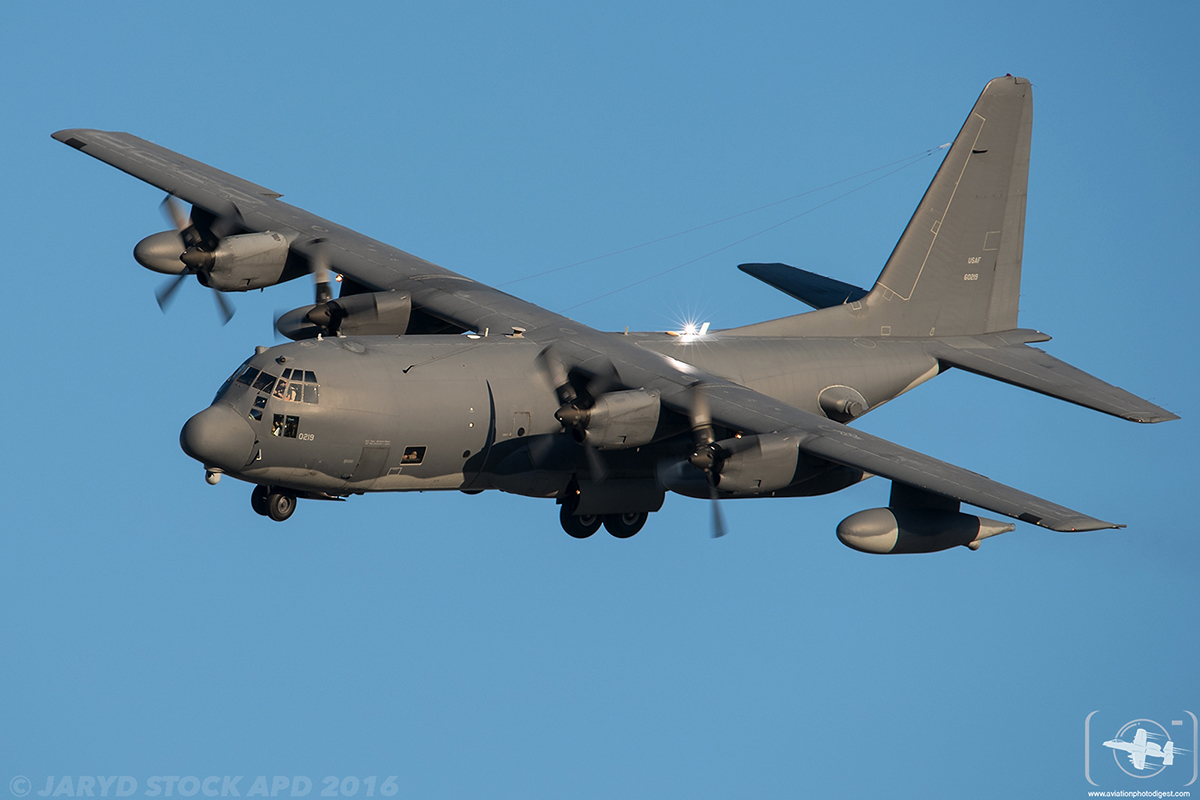