Each Labor Day weekend the American Airpower Museum in Farmingdale, New York puts together a Warbird Weekend. The museum’s aircraft are brought out and flown. This year they had some visitors from the Collings Foundation who brought their pristine B-17G, B-24J and P-51C aircraft. 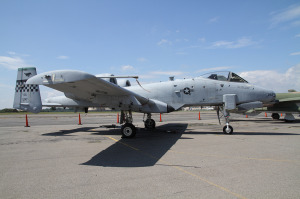 Also this was the first Labor Day featuring the Republic A-10 Thunderbolt II recently acquired by the museum. This A-10 is formerly from the 355th FW at Davis Monthan AFB where it was last used to train ground maintenance crews. Prior to that it served with the 25th Fighter Squadron at Osan AB Korea. This was a homecoming of sorts, since Republic Airport was the site of Fairchild Republic where A-10s were built.

It also afforded a very rare opportunity to line up all the Republic Aircraft together in one place. This included the aforementioned A-10, F-84E Thunderjet, F-84F Thunderstreak, RF-84F Thunderflash, F-105D Thunderchief and P-47 Thunderbolt.

For those who wanted an awesome flight experience, the bombers and the P-51 were selling flights during the weekend, providing an opportunity to relive history.

Aircraft flown during the weekend:

The first B-24 flight out on Friday was an honor flight, taking up 5 WWII veterans, 3 of which flew B-24’s during the war. On Monday the P-40 and P-51 went up together and performed a number of formation passes over the museum. The B-17 and B-24 flew a couple of times each day giving customers a memorable experience. The museums B-25 and C-47 also made frequent flights. The C-47 offers a paratrooper experience where guests dress in realistic paratrooper gear and go out on a mission. Interesting note on the the museum’s B-25 “Miss Hap”, it was formerly used as general Hap Arnold’s VIP transport and is the oldest surviving B-25.
The American Airpower Museum definitely provides a comprehensive look back at aviation history especially Long Island’s rich aviation heritage.