The AMARG Vision : The Past, Present, and Future of Military Aviation

Home » Articles » Base Visits » The AMARG Vision : The Past, Present, and Future of Military Aviation

The AMARG Vision : The Past, Present, and Future of Military Aviation

Located at the eastern edge of the Sonoran Desert, taking advantage of the low humidity, infrequent rainfall, and hard clay-like “caliche” layer of soil to help mitigate any form of corrosion and provide a stable storage foundation, lays a resting place for aircraft that have helped defend the United States and it’s allies since World War II. This place is the 309th Aerospace Maintenance and Regeneration Group (AMARG), commonly referred to as the “Boneyard”.

While the term “boneyard” evokes images of a graveyard, a last resting place for once-great defenders of the cause, this is not always the case with aircraft designated for AMARG. Sometimes aircraft can be “reborn” or used to repair or enhance aircraft that continue to fly. In fact, the 309th Aerospace Maintenance and Regeneration Group (AMARG) is much more than just a boneyard. It is a vital component in the current and future lifecycle of military aircraft. Lifecycle elements include: aircraft regeneration, aircraft overhaul, aircraft storage, aircraft parts reclamation, and aircraft disposal. 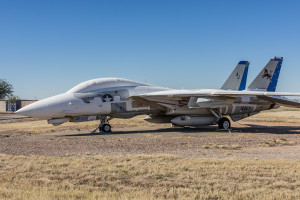 What began in 1946 as a storage facility for B-29 bombers and C-47 cargo planes, now is home for over 4000 aircraft representing 80 different weapons systems with an acquisition value of approximately $35 billion dollars. The 2,600-acre (4-square-mile) facility is difficult to miss for anyone passing through the southeast corridor of Tucson, Arizona. Located adjacent to Davis-Monthan Air Force Base, many rows of historical aircraft can be seen for miles through the perimeter fencing. Using the Google Maps satellite feature, one can see the vast array of aircraft in a variety of artistic patterns.

AMARG employs approximately 700 Department of Defense civilians and private contractors, while only three active-duty USAF personnel are assigned there.  The aircraft stored at AMARG continue to be owned by the military branch, government agency, or aviation museum that delivered, or took responsibility for the aircraft.

Over the past few years, AMARG has been responsible for a number of high-profile projects that contributed to the readiness of the U.S. Armed Forces. One such project was the reactivation of the F-4 Phantom for the first phase of conversion to the unmanned QF-4 aerial target drone configuration. The final F-4 reactivation took place in 2012. Currently, the AMARG team is reactivating F-16 Fighting Falcons for the USAF (Air Combat Command) full-scale aerial target (drone) program (QF-16 configuration). These configurations help pilots prepare against a target that has the performance and characteristics of an adversary aircraft to help the pilots maintain optimum readiness.

Another high-profile project has been the aircraft modifications needed for the A-10 Thunderbolt II helmet mounted cueing system (HMCS). HMCS is the latest tactical feature for A-10 pilots, furthering the A-10’s capabilities as a Close Air Support (CAS) and ground attack aircraft. According to U.S. government documents outlining the HMCS’s capabilities, the HMCS significantly increase pilot situational awareness (SA), aircraft survivability, and lethality in every mission area. With the capability to cue sensors and weapons off-boresight, using a helmet line of sight (LOS) as the aiming reference, pilots can quickly engage targets of opportunity while still identifying friendly positions via data-link and other means. This enhances time sensitive targeting capabilities, and greatly reduces the risk of “friendly fire” incidents and collateral damage. AMARG’s skilled technicians recently concluded performing wiring modifications on A-10’s in preparation for the HMCS. With this project, AMARG completed 250 modifications while maintaining a 99.5% “on time” delivery rate. 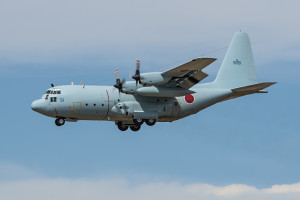 Another AMARG project included the recovery of six C-130 aircraft for the Japan Maritime Self Defense Force (JMSDF). These aircraft were purchased by the JMSDF through NAVAIR’s TacticalAirlift, Adversary, and Support Aircraft Program via the Foreign Military Sales (FMS) office. Recovery of these aircraft began at AMARG and they were then transferred to the depot at Hill Air Force Base, Utah for phased maintenance interval regeneration. Another recent AMARG regeneration effort involved former USAF/US Army C-27’s being prepared for delivery to the U.S. Coast Guard.

Moving forward, AMARG’s capabilities will be further enhanced with the completion of a new 76,746 sq. ft. high-bay hangar facility. With construction expected to be completed in late-Spring 2015, this facility, complete with an observation deck, is large enough to accommodate the maintenance, repair and inspection of two C-130 or KC-135 aircraft. This modern, state-of-the-art, facility will feature energy-efficient initiatives such as indirect evaporative cooling systems, translucent panels for natural daylight illumination, and space saving solar panel systems.

While AMARG is busy with multiple projects, the ongoing, and most notable, of their mission elements is the preservation of aircraft. Each year, up to several hundred aircraft fly into Davis-Monthan AFB throughout the year to be delivered for storage at AMARG. This is where technicians perform a series of procedures prior to storage of the aircraft. These procedures include:

– Washing all carrier-based aircraft of any corrosive salt contaminates.

– Running the aircraft through the “flush farm” (engine/fuel preservation area) to prepare for storage.

– Aircraft is then brought to the wash rack for a thorough cleaning and corrosion control.

– Escape systems are “safed” by removing the ejection seat actuators and initiators, etc…

– Plastic tape is used to seal all crevices.

– A car wax like substance is applied to the canopy or cockpit plexiglass.

– Aircraft are then sealed with a black water-based strippable paint (2 coats).

Other procedures may be performed, or current ones modified, based on the storage classification of the aircraft. Some aircraft are stored for parts, some with intention of flying again, etc…

Another key mission element of AMARG is aircraft disposal. While after WWII aircraft were destroyed and smelted on-site, private contractors are now used to dispose of the aircraft. Prior to any aircraft being shipped to private firms for destruction, the disposal team at AMARG recover any precious metals, remove any hazardous equipment or materials, and de-militarize the aircraft. The aircraft is then transferred to the Defense Logistics Agency to coordinate the auction to private firms.

While visiting the “Boneyard” one can see an aviation evolution through time. Relics of past conflicts waiting for their chance to contribute something to the future.

The “Boneyard” is much more than a resting place for retired aircraft. AMARG is vital to the present and future of the armed forces of the U.S. and it’s allies. While the “Boneyard” contains a tremendous amount of history, present and future history is made through upgrading existing aircraft, foreign military sales, aircraft reclamation, and other vital initiatives.

A copy of the current AMARG inventory can be found HERE

Aviation Photography Digest would like to thank Lt. Erin Ranaweera and SSgt Courtney Richardson of 355th Fighter Wing Public Affairs for their assistance with this article.