Airbus tours the versatile A220

Airbus promotes the A220 in the Asia Pacific region as Qantas signs major Airbus deal.

Airbus has deployed the A220 passenger aircraft to the Asia-Pacific region as part of its latest demonstration tour. The aircraft, an Air Baltic A220-300, made a demonstration flight for VIP’s and media in Sydney, Australia on Monday afternoon and departed to Singapore on Tuesday the 3rd of May. The week-long campaign will see the aircraft make another two stops in Hanoi (Vietnam) and Tokyo (Japan).

On each leg, invited guests will tour the Air Baltic aircraft, which features a comfortable layout of 145 seats in a single class passenger cabin. Airbus executives will also give product briefings of the A220 and guests can enjoy a demonstration flight.

The A220’s range and capacity make it ideal for carriers that want to open new regional routes out of Asia-Pacific, or require an aircraft for lucrative but thin routes out of the country. It also enables a more cost-efficient and seamless way to connect to and from international services to domestic and regional destinations.

Airbus said in a statement that by “Incorporating state-of-the-art technologies, the latest aerodynamic design and new generation Pratt & Whitney PW1500G geared turbofan engines, the A220 generates fuel savings of up to 25 per cent compared with older generation aircraft of a similar size. 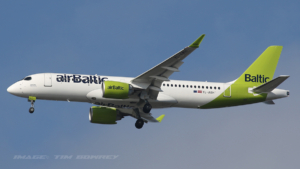 Capable of flying non-stop on routes of up to 3,400 nautical miles (6,300 km), the A220 offers unmatched range capability allowing connections between the Asia-Pacific region, with Australia, North Asia and the Middle East.”

Today, the A220-300 is operated in the Asia-Pacific region by Korean Air on both domestic and international services with 10 aircraft. Australia’s national carrier Qantas announced on Monday that it is ordering 20 aircraft as part of its domestic fleet replacement programme. Air Vanuatu has also ordered three A220s, comprising two A220-100s and one A220-300. To date, Airbus has received 740 orders for the A220 and delivered more than 200.

Qantas announced on Monday the 2nd of May at its Sydney Airport Jet Base that the airline will start the renewal process of its narrow body jets as part of its ‘Project Winton’ with firm orders for 20 Airbus A321XLRs and 20 A220-300s as its Boeing 737s and 717s are gradually retired. The first of these aircraft will start to arrive in late calendar 2023, with the order including purchase right options for another 94 aircraft for delivery through to at least 2034.

Qantas in another major announcement delivered by the CEO Alan Joyce at the same time said that International operations would be bolstered by the acquisition of 12 Airbus A350-1000s that will be ordered to operate non-stop  flights from Australia to other cities including New York and London apart of its wide body fleet overhaul called ‘Project Sunrise’. These aircraft will feature market-leading passenger comfort in each travel class with services scheduled to start by the end of calendar 2025 from Sydney.

Touchdown at Sydney Airport for the Airbus A350-1041 Demonstrator F-WMIL arrives for the Project Sunrise announcement by Qantas CEO Alan Joyce on Monday May 2nd, 2022.- Jaryd Stock

All of these next generation aircraft – through their lower emissions, longer range, less noise and better economics – will improve how people travel around Australia and overseas.

Qantas Airlines CEO Alan Joyce said: “New types of aircraft make new things possible. That’s what makes today’s announcement so significant for the national carrier and for a country like Australia where air travel is crucial.

“The A320s and A220s will become the backbone of our domestic fleet for the next 20 years, helping to keep this country moving. Their range and economics will make new direct routes possible, including serving regional cities better.

Airbus stated that the Asia-Pacific region is a core market for Airbus and it is the fastest growing market for air transport with 5.5% annual growth in passenger traffic (versus a global average of 4.3%). Today the region accounts for a third of the European manufacturer’s total order book and a third of its revenues. 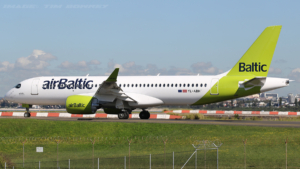