Boeing and the U.S. government recently signed a five-year, $3.4 billion contract through which the Army, and a unspecified customer outside the U.S. will acquire the latest Apache attack helicopter at a significant savings to taxpayers.

This is the first multi-year agreement for the Apache “E” variant, also known as the ‘Apache Guardian’. The Army will receive 244 remanufactured Apaches, while 24 new builds are expected to head to Saudi Arabia as the United States Department of Defence announced yesterday (03/15/2017) for the sale of the AH-64 E Apache attack helicopter multi-year lots 7-11, to Saudi Arabia through a Foreign Military Sales (FMS). The deal consists of AH-64E full-rate production of remanufactured aircraft and new build aircraft, remanufacture and new build Longbow crew trainers, peculiar ground support equipment, initial spares, integrated logistics support, and engineering technical services. The work will be performed at Boeing’s AH-64 production plant in Mesa, Arizona, with an estimated completion date of June 30, 2022.

“This agreement is great news for our Army, our soldiers, the American taxpayers, our industry partners and numerous international partners,” said U.S. Army Col. Joseph Hoecherl, the Apache project manager. “It is a direct result of the professional dedication and diligent efforts by government and industry teammates to provide the much needed capabilities of the world’s best attack helicopter – the AH-64E Apache – at a fair and affordable price that results in year over year savings to the taxpayer. In the hands of our trained U.S. soldiers, the Apache’s technologies and resulting capabilities are essential to Army operations around the globe.”

The Echo variant of the Apache is built in Mesa, Arizona and deliveries of the AH-64E model began in October 2011. Seven customers outside the U.S. have ordered this variant. Including this latest version, the U.S. and 15 other countries have relied on the Apache during the past three decades.

“The Apache has made a tremendous impact in the defence of the nations that have flown it for the last 37 years,” said Kim Smith, Boeing Attack Helicopters vice president and program manager. “Our team understands the responsibility we have to deliver the best aircraft on time at an affordable price every day, and we are committed to maintaining that well established tradition of excellence.”

Back in April 2016, Boeing and the U.S. Army have signed a contract to remanufacture 117 AH-64D Apaches to the new, more capable AH-64E model. The agreement, which also includes the acquisition of Longbow Crew Trainers, logistical support and spares, carries a total contract value of about US$1.5 billion. The agreement in 2016 modified the existing contact between Boeing and the Army for the full-rate production of lots 5 and 6 Apache helicopters. The Army was to return 117 AH-64D Apaches to Boeing’s Mesa, Arizona production centre to be remanufactured into the AH-64E Guardian configuration. The Army followed a similar model when the AH-64A Apaches were remanufactured into AH-64Ds.

Recently at the Australian International Airshow held at Avalon Airport near the City of Melbourne in Australia, Boeing chartered a Volga Dnper Antonov An-124 Ruslan to fly from Gateway Airport in Mesa, Arizona to Avalon transporting a U.S. Army AH-64E Apache fresh off the production line to be displayed to an expected audience of Australian Defence Force officials.

In 2001, a tedious process in selecting a new platform for the Australia Army’s new attack helicopter that was to replace the Huey and Kiowa was finalised with the Australian Government/ Defence Force selecting the then Eurocopter now Airbus Tiger ARH instead of the U.S. built Apache (both helicopters were displayed to officials, during that time the AH-64D Longbow variant of the Apache was on display) but now Boeing is pitching the latest generation of the Apache lineage, the AH-64E, as a potential Tiger replacement.

The Australian Defence White Paper (DWP) and the accompanying Integrated Investment Program (IIP) that was released in early 2016 showcased significant new investments in Army Aviation, ranging from the relatively early retirement and replacement of the Tiger ARH to the acquisition of a new armed light helicopter for Special Forces support such as the OH-6 Little-Bird, and additional CH-47F Chinook heavy-lift helicopters.

The White Paper seemed to indicate an early retirement of the Tiger ARH following on- going issues with the European-developed helicopter’s sustainment and serviceability rates and issues connecting specific data-links to other ADF assets and networks that have limited the helicopters operational use and abilities working with other ADF units. “The Tiger has had a troubled history – essential upgrades are programmed to maintain the capability’s effectiveness,” the Integrated Investment Program document, which was released apart of the White Paper, stated.

“Defence will invest in a future armed reconnaissance capability to replace the Tiger, which as the DWP stated at the time could include manned or unmanned systems or a combination of both, to be introduced from the mid-2020s.”

The IIP further notes “Armed reconnaissance helicopter operations will rely increasingly on intelligence and mission data and access to the common operating picture and other real- time data for effective integration with joint forces.” This is something that is at the forefront of everyone’s mind inside the Australian Defence Force and what direction they want to take in providing a fully fifth generation integrated, networked fighting force in real time situations anywhere in the world. An example of this is the Royal Australian Air Force’s Plan Jericho, where every platform either flying or on the ground is linked in and fully integrated with each other and other ADF platforms such as the Royal Australian Navy’s new Adelaide class Air Warfare Destroyer three of which will be delivered.

The Australian Army operates 22 Tigers, first deliveries took place when the first two Tigers, A38-001 and A38-002 were handed over to the Australian Army in the middle of December 2004, but the type achieved final operating capability (FOC) on April 18 2016, more than 11 years after the type first entered service. That milestone was overdue as it was originally planned for June 2009 and then had again been pushed back as a plan to achieve FOC was slated to be reached by January 2016.

Instead of rather than persisting with a planned $1-2 billion mid-life upgrade project for the Tiger – listed under the old Defence Capability Plan as AIR 87 Phase 3 Armed Reconnaissance Helicopter Capability Assurance Program (ARH CAP) the Tigers now look set to be retired early, albeit around about 20 years after entering service.

A particular table in the IIP lists the ‘ARH Replacement’ as having a program timeframe of 2021-2030 at a total acquisition cost of $5-6 billion. The IIP lists “approximate investment values” for capabilities, which includes “enablers” such as base upgrades and infrastructure costs, rather than just acquisition budget costs for hardware alone.

As a proven and trusted process that has taken place before with Australia purchasing Boeing aircraft such as the C-17 Globemaster III and CH-47F Chinook’s in the past, it’s expected the sale of AH-64E’s to Australia would be under the Foreign Military Sales procedure from the U.S. Government with aircraft produced in the same multi-year contract as the US Army which is acquiring 690 E-models which is planned to be concluded by the mid 2020s. That would mean Australia would be paying around the same price as the U.S. Army would for their AH-64E’s. Further more, and something that has always a good way to encourage new customers is that Boeing see’s as being the right choice for the Australian Army’s needs in the future is that the Apache is a proven and mature platform with more than 2,200 produced since 1983. So far 278 E-models have been delivered in the United States and to international customers.

“It is combat proven and battle tested,” he stated whilst addressing media at the Australian International Airshow during one of the trade days. Australian Tigers has not had the same luxury of time to prove it’s effectiveness it hasn’t yet fired a shot in anger though French Tigers have deployed operationally to Afghanistan.

Mr Ballew also said the E-model, though appearing identical to the D-model, offered improved speed, range, endurance and payload, better interoperability and fire control. Depending on mission requirements, the Apache can carry a lethal selection of weapons including Hellfire and Stinger missiles. Some of the AH-64 Apache D-models impressive capabilities listed include, Longer-range weapons accuracy and all-weather/night fighting, Detection of objects (moving or stationary) without being detected, Classification and threat-prioritisation of up to 128 targets in less than a minute,  Integrated sensors, networking, and digital communications for situational awareness, management of the combat arena in real time, and digital transmission of images and target locations to joint operations battlefield commanders.

The U.S. Army’s Apache project manager Colonel Jeffrey Hager told media last year that the Echo model “can fly higher, faster and further than the D model — and the D model is an extremely capable aircraft”. He continued on to state that, “The enemy continually (was) thrown off base because the Echo showed up to combat operations well before the Delta could have under the same conditions.”

The AH-64E was first fielded in Afghanistan by the 1-229th Attack Reconnaissance Battalion, which flew nearly 11,000 combat hours. Hager described this as an “absolutely phenomenal” workload given that it is a “brand new airframe”.

Demonstrating the improved capability to operate with other platforms the media at the Australian International Airshow witnessed the Apache linked in to the video feed from a Scan Eagle remotely-piloted aircraft. With that capability, a Scan Eagle could watch over an enemy position for up to 16 hours, providing imagery to an Apache for a successful attack.

Mr Ballew said the Apache would still be flying in 2060. “We have been delivering on time and on budget since 1984. This is the most lethal, most survivable, most sustainable aircraft. It is flying around the world today,” he said. “Boeing has a long and proud history with Australia. We have proven that we come and work with Australia. We don’t just sell aircraft and say good luck.

”You get the world’s best attack aircraft and you get long-term support from a company like Boeing and increased jobs in country which is something that the Australian Government is keen on ensuring. And you are going to be able to operate with all the other countries flying it right now.”

A Boeing spokesman said the AH-64E Apache could provide Australia with the industry- leading, battled-tested, armed reconnaissance and attack helicopter that the Commonwealth needs. “With unmatched firepower, the Apache can meet virtually any mission requirement in land and littoral environments and provides aircrews with enhanced situational awareness through its integrated Intelligence, Surveillance and Reconnaissance capabilities,” he said.

The Boeing team is already working on a modernisation plans that will ensure the Apache remains operationally suitable and effective through to the 2060s. Modernisation efforts range from software upgrades to field and depot level modifications, and could include re-manufacturing some elements. 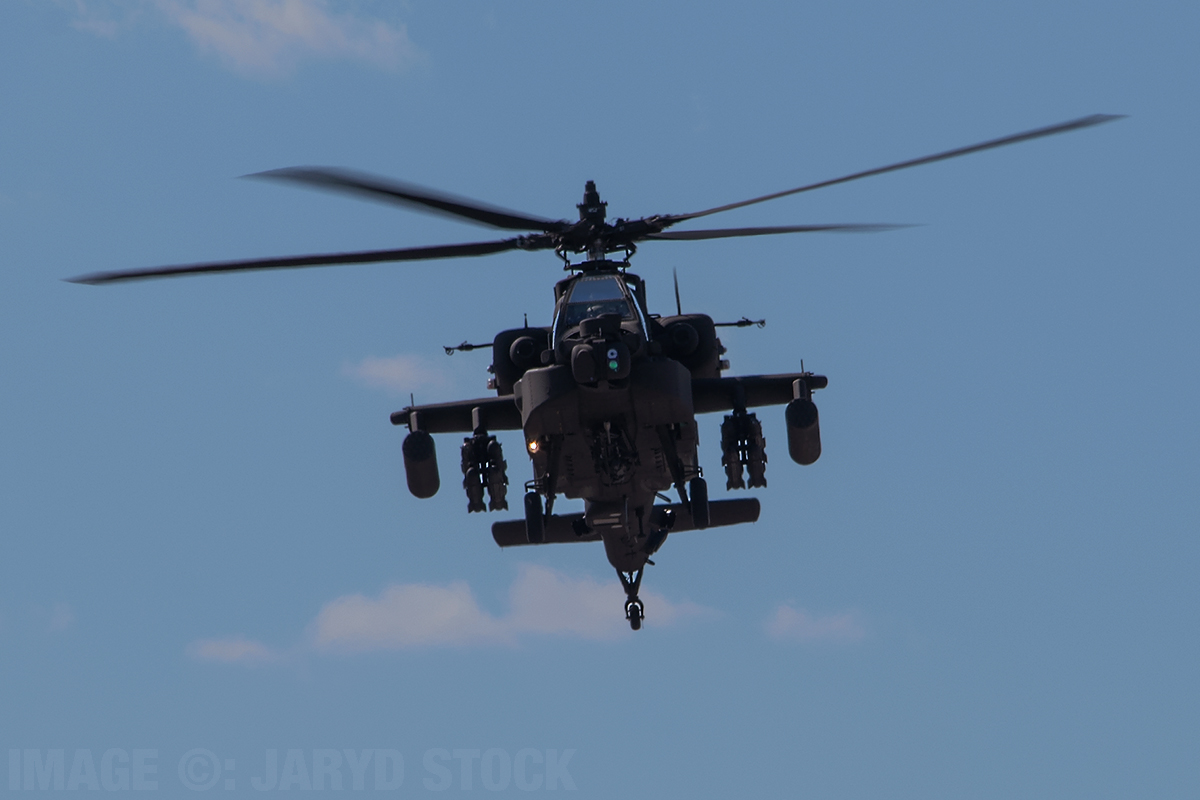 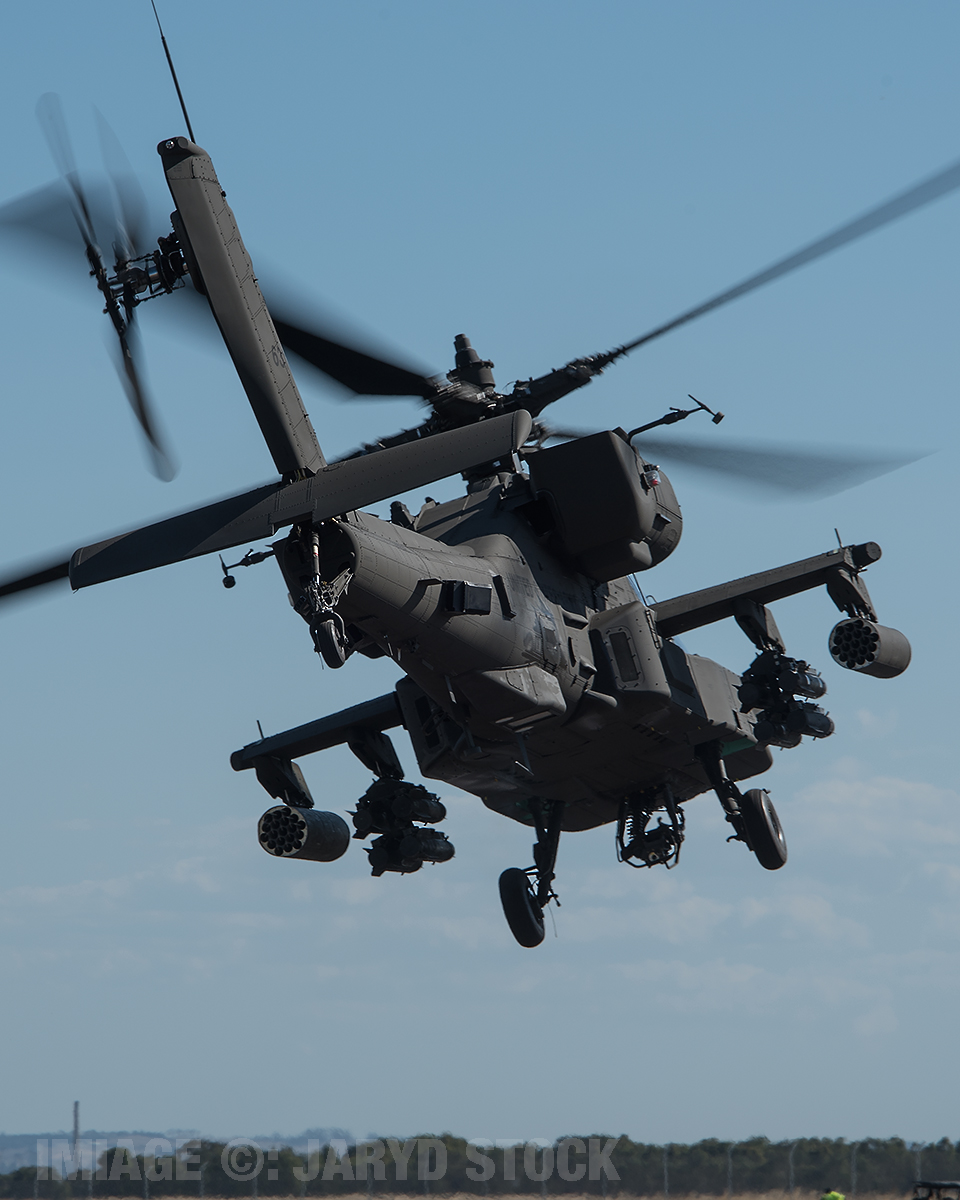