‘ABE’ CVN-72 trains with partners in the Indo-Pacific.

ABE in the Indo-Pacific.

The carrier and strike group has been deployed on its Western Pacific (WESTPAC) cruise since January 3rd after departing from from San Diego, and since then has conducted several joint and combined exercises with a variety of allies in the Indo-Pacific region, including the Japan Maritime Self Defense Force, and U.S. Navy assets also in the region such as USS Carl Vinson (CVN 70) Carrier Strike Group, USS America (LHD 6), USS Essex (LHD 2), USS Ashland (LSD 48), USS Miguel Keith (ESB 5), USS Dewey (DDG 105) and components of the III Marine Expeditionary Force (MEF) which is based in Okinawa.

“Abraham Lincoln Carrier Strike Group is a powerful presence in the Philippine Sea that serves as a deterrent to aggressive or malign actors and supports a free and open Indo-Pacific,” said Rear Adm. J.T. Anderson, commander, Carrier Strike Group Three. “There is no better way to strengthen our combat-credible capabilities than to work alongside other joint forces to demonstrate our commitment to sovereignty, the region, and a rules-based international order.”

Onboard the aircraft carrier is the embarked Carrier Air Wing (CVW) 9 aircraft which are home based at Marine Corps Air Station Miramar, Naval Air Station’s North Island, Whidbey Island, Point Mugu and Lemoore. CVW-9 are integral to the U.S. Navy’s vision of the Air Wing of the Future, aircraft apart of the wing include the F/A-18E/F Super Hornet, EA-18G Growler, E-2D Advanced Hawkeye and the F-35C Lightning and MH-60S/R Seahawk Helicopters and the CMV-22B Osprey. 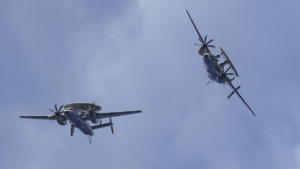 During the exercise in a show of force CVW-9 aircraft were launched from the flight deck of the Nimitz-class aircraft carrier USS Abraham Lincoln (CVN 72) while underway in the Philippine Sea to conduct joint, dynamic deterrence missions with mission support and aerial refuelling from PACAF’s 909th Aerial Refueling Squadron “Young Tigers” KC-135R Stratotankers which launched from Okinawa.

The utilisation of the KC-135’s increases the range of the the strike package that is unleashed from the carrier group and helps the wing cover the vast distances needed whilst operating in this part of the Pacific Ocean that is increasingly becoming a hotly contested part of the world especially with Chinese ambitions regarding Taiwan.

“Carrier Air Wing Nine’s highly skilled aviators and Sailors, with the coordination and support from Pacific Air Forces, demonstrated concurrent, multi-axis long range maritime strike capabilities,” said Capt. Lew Callaway, commander, CVW-9. “Naval aviators led a joint team to demonstrate to any potential adversary that we may hold their forces at risk at a time and place of our choice, from every direction.”

The strike packages were delivered by F/A-18E/F Super Hornets and F-35C Lightning’s supported by EA-18G Growlers performing Electronic Warfare missions jamming simulated radars and the E-2D Hawkeye providing command and control element guiding the aircraft in to the simulated target. The F-35C was also able to provide a better picture to the battle management team onboard the E-2 and back onboard the Lincoln through the use of its advanced and integrated sensor suite, with 909th ARS being positioned nearby for AAR duties.

A KC-135 Stratotanker from the 909th Air Refueling Squadron takes off from Kadena Air Base, Japan. Benjamin Sutton

A U.S. Navy spokesman stated to APD that Abraham Lincoln Strike Group is on a scheduled deployment in the U.S. 7th Fleet area of operations to enhance interoperability through alliances and partnerships while serving as a ready-response force in support of a free and open Indo-Pacific region.

The ABECSG is also supporting the only forward deployed Aircraft Carrier in the U.S. Navy the USS Ronald Reagan CVN-76 based at Sasebo, Japan, with both carrier groups routinely training with their Japanese counterparts in the 7th fleets area of responsibility.

In April CVN-72 also played host to units from the Japanese Ground Self Defence Forces, with the JGSDF 1st Helicopter Brigade CH-47’s which are based in Chiba, Japan deploying onboard the carrier conducting integrated flight operations with Japanese Amphibious Rapid Deployment troops. 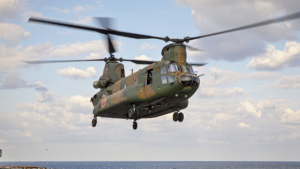 CVW-9 consists of an F-35C squadron, the “Black Knights” of Marine Fighter Attack Squadron (VMFA) 314 based at MCAS Miramar, California.

An EA-18G Growler, assigned to the “Wizards” of Electronic Attack Squadron (VAQ) 133, prepares to make an arrested landing on the flight deck of the Nimitz-class aircraft carrier USS Abraham Lincoln (CVN 72). Javier Reyes 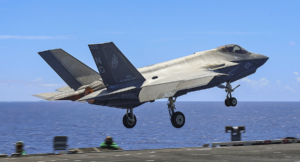 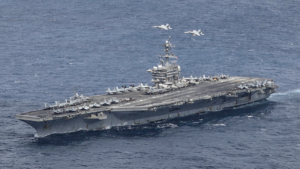 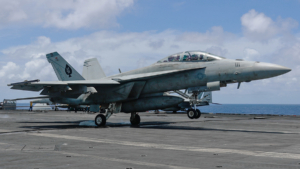 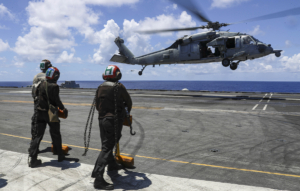 F/A-18E Super Hornets, assigned to the “Tophatters” of Strike Fighter Squadron (VFA) 14, fly in formation during an in-flight change of command ceremony over the flight deck of the CVN-72.  Julia Brockman

F-35C Lightning II, assigned to the “Black Knights” from VMFA-314 TRAPs aboard CVN-72 as the LSO’s watch on. Julia Brockman