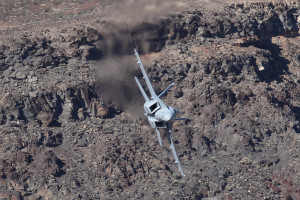 A Super Hornet makes a hard break through the Canyon

Out on the western edge of Death Valley National park in California there is an area known to the military as the R2508 Complex which is administered by Edwards AFB. This area is composed of internal restricted areas, Military Operations Areas, Air Traffic Control Assigned Airspace areas, and other special airspace. Use of these areas include bombing ranges, supersonic corridors, low altitude high speed maneuvers, radar intercept areas, and refueling areas. Within this area is a training area where they practice low level flying. The canyon is known as Rainbow Canyon (or Starwars Canyon as referred to in the R-2508 Complex Handbook) and the route through this canyon is known as the Jedi Transition. This transition connects Owens Valley in the west with the Panamint Valley in the east. Having seen many awesome shots from this area, I decided to head out there one Thursday and see for myself.

Getting there is quite a haul from Las Vegas, there are many windy steep roads climbing over the mountains and back into the valley. But the scenery is awesome and stopping along the way is a must. There are multiple areas to view the action but a good starting off point is the parking area known as Father Crowley Point – GPS coordinates 36.351858,-117.550664. It is about 4000 feet above sea level. By taking the dirt road on the south side of the parking area for about a quarter mile, you can park your car fairly close to the canyon edge and set up over there. The vistas are amazing and it’s very hard to appreciate the size and scale of the canyon. Until the first aircraft approaches, you have no feel for how small they initially appear in the canyon.

In my visit there, I saw multiple types of approaches – some aircraft approached deep in the canyon from the west and passed below us, others dove over the parking area and into the canyon and the F-15s came in from the east. I was fortunate enough to catch some Hornets from the VFA-147 Argonauts, the VFA-122 Flying Eagles, a Growler from VX-31 and a pair of F-15 Eagles from the California Air National Guard base at Fresno. (Much of the action here are jets from NAWS China Lake, NAS Lemoore, Edwards AFB, Fresno Air National Guard Base and occasionally some from Nellis AFB.) 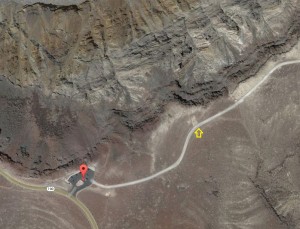 Yellow arrow indicates where the photos were taken

From talking with multiple sources, it would appear that the best days to visit would be Tuesday through Thursday. On any given day though, activity is very sporadic and the challenge is to be continually on alert. The sound of the aircraft on approach is behind the aircraft and your reaction time will be a couple of seconds.

As for camera equipment, you will be fine with 300 – 400 mm for most shots. You can also drive further east on the dirt road for more top side views. Other necessary equipment – a chair, sunscreen, food and plenty of fluids. Lastly, the best months to visit would be October through March, since the very high temperatures in the warmer months can make things really tough.

More visits are definitely in the works.