Gabriele Rivera takes us to his home country of Italy for a look back at a very important milestone event, the 55th anniversary of PAN (Pattuglia Acrobatica Nazionale, aka Frecce Tricolori). PAN, known militarily as 313° Gruppo Addestramento Acrobatico, is the aerobatic demonstration team of the Aeronautica Militare Italiana (AMI), based at Rivolto Air Force Base in Italy.

Report and Photos by Gabriele Rivera 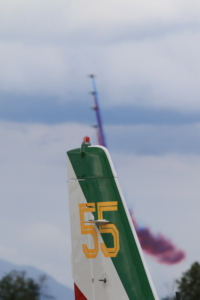 Many of us would like to celebrate our birthday every year. Perhaps organizing a nice reunion with relatives and friends, but typically, once celebrated the coming of age, the daily tasks and expenses prevent us from devoting our energy to this purpose and the frequency of parties decreases. Once in a while though, one tries to throw a big party, often for special achievements. Moving away from the analogy with our personal lives and approaching the aviation world, in the last decade, restrictions in the Italian defense budget have imposed a greater moderation in celebrating official anniversaries. So, for example, the interval between two editions of an air show has increased, often letting five, ten or even more years pass before having the chance to have another one.

September 2015 marked the approaching end of the 55th season of Italian Air Force acrobatic team PAN (Pattuglia Acrobatica Nazionale, aka Frecce Tricolori). To celebrate this,  the Aeronautica Militare Italiana (AMI), also known as the Italian Air Force (ItAF), decided to organize a long awaited event. If it is normal that the guests pay homage to the “birthday team” with their presence and their performances, it is perhaps unusual to see the host bringing profusely lavish gifts to his guests, in this case showcasing in Rivolto the best and the newest pieces in their inventory, with some surprises that will soon be discussed.

The guest list was a special one. Along with frequent protagonists of the European airshow circuit such as the Belgians Red Devils, the Patrouille de France, the Royal Jordanian Falcons, the Polish ISKRY, the Spanish Patrulla Aguila, the Patrouille Suisse and the Turkish Stars, particular interest has been aroused among the fan community by the Finnish Midnight Hawks and the Saudi Hawks. Military participants included also the Belgian, Dutch and Polish Solo Demo teams, respectively flying on F-16, AH-64 Apache and MiG-29, as well as the ubiquitous Austrian Saab 105OE.

In addition, there was the participation of some civil aircraft. The Breitling Wingwalkers Stearmans have enjoyed a well-established success (thanks to the scenic presence of the two acrobats), but just as enthusiastically welcomed performances by Luca Bertossio, acclaimed world champion with his glider SWIFT S1, as well as those of world champion Aude Lemordant, a recent addition to the Breitling team with her Extra 330SC. We can not forget the beautiful and colorful evidence of Audace team, seven para-motors, which danced in the sky with the Carnic Alps as background. A special mention goes to a special team, the WeFly Team with their  ultralight Texan 2.0, with two out of three piloted by men whom the fate denied the use of their legs but not of their wings.

A great addition to the show was the performance of the Legend formation, with a truly unique symbolic meaning. The formation consists of six aircraft that have formed over time the backbone of the Air Force flight schools, and is half privately owned (i.e. the Nucleo Aereo Acrobatico Parmense’s Fiat G.59, the T-6A Texan owned by Sandro Pagliarin and Volafenice‘s Aermacchi MB-326E (restored in a lovely orange color scheme); the other half is made up of two Aermacchi currently in service, the MB-339A and MB-339CD, and their heir, the Alenia Aermacchi T-346A Master. The three predecessors, in formation with the three military trainers from the 61st Wing of Galatina, flew several flypast, alternating formations to solo ones, each time receiving continuous applause from the public.

Another example of a mixed civilian-military formation was the flypast of a Spad XIII replica (built by Giancarlo Zanardo) with the insignia of Francesco Baracca’s plane, flanked by two Typhoon (from the 36th Wing of Gioia del Colle) flaunting the Cavallino Rampante (the Prancing Horse) on the tails. Besides, how better commemorate 100 years since the Italian entry into the World War I arena, the war that saw as protagonists the mountains that frame Rivolto base, also honoring Baracca, the ace of the fledgling Italian Army aviation, fallen three years later in Nervesa della Battaglia (a few miles from Rivolto).

There is always massive public support at Frecce Tricolori performances and 55 PAN was no different. For 55 PAN the crowd reached record numbers. Over 400,000 people participated enthusiastically on Saturday and Sunday. On Saturday morning a heavy downpour interrupted the Saudi Hawks exhibition, forcing the organization to suspend the event for about an hour, the final day was instead held in the best possible conditions. It was also met with unanimous acclaim the Spotter’s (or photographer’s) Day, scheduled on Friday, when a large audience of fans and spotters were invited to attend the training sessions from various vantage points.

As already anticipated at the beginning, the Air Force took the opportunity to exhibit its jewels, both technological and human. Starting with the traditional opening passage, performed by a 15th Stormo HH-139A which flew over the runway hoisting the Tricolore (the Italian flag), several other assets have interleaved their demo slots with guests’ ones; the Reparto Sperimentale Volo (Test Flight Detachment) has delighted the audience with an effective demonstration of Typhoon’s exuberant qualities, highlighted by the smokes generated by the special pods installed at the outer pylons. Afterwards took off the T-346A Master, whose pilot has shown with dynamic maneuvers the possibilities offered by the successful aircraft design.

The rotary wing performances were another highlight of the airshow. In addition to the aforementioned HH-139A, later called to demonstrate the infiltration and subsequent recovery of a raiding squad, the public was able to appreciate the performance of its elder brothers, the AW-149 and the new HH-101A Caesar. The last one being recently presented at Cervia’s 15th Stormo, which will be used for SAR missions, Personnel Recovery, Special Operations Air Support and Slow Mover Interceptor. In the static area the AW-609 convertiplane was proudly displayed; many hoped to see it fly, but it was still worth to examine it closely.

If the Agusta Westland brand dominated the helicopter sector, Piaggio Aerospace has been subject of huge interest in the remotely piloted aircraft (RPA) sector. Putting on display, a mock-up of the P.1 HH HammerHead, unmanned version of its commercial success, the P180 Avanti. The mock-up sported Amendola’s 32nd Stormo insignia, where the real one will soon take service, alongside with the Predators already in use since several years, one of which was on static display (while another one hovered over Rivolto, monitoring the airshow with the different sensors available, whose images were broadcasted several times during the TV coverage).

During the two days, several of the aerial demonstrations created a lot of enthusiasm; two air to air refueling simulations (a KC-767A tanker with Typhoons, Tornados and AMXs trailing behind and a KC-130J with a HH-101A) have shown the skills acquired by ItAF over the last fifteen years. On Sunday, an Alitalia’s Airbus 330 had performed a slow flypast escorted by two Typhoons, a tangible demonstration of QRA (Quick Reaction Alert), one of the tasks that the Air Force is called on to be ready to execute every day, keeping 24/7 a couple of Eurofighters and their pilots prepared for take-off and vectored towards unidentified aircraft entering national airspace. Another memorable demonstration included two Tornados simulating an attack to the base which astonished the audience of both days (and tested several photographers’ ability) with a high speed pass with fully swept-back wings.

The icing on 55 PAN’s birthday cake was the chance of seeing gathered together under one roof (or rather, in a single hangar) all Italy’s astronauts: Franco Malerba, Umberto Guidoni, Paolo Nespoli, Maurizio Cheli, Roberto Vittori, Walter Villadei, Luca Parmitano and Samantha Cristoforetti. Parmitano and Astro Samantha (landed in the morning as passenger of a WeFly Team pilot) were greeted by ovations worthy of a world class football player (by virtue of their participation in International Space Station missions thoroughly reported by the media).  There was also tremendous interest for their colleagues’ speeches. Despite the exceptional nature of these men and women and their work, the red thread that connects their testimonies is the forecast that the fascinating work of astronauts will become, in the years to come, something ordinary. Much like today, after a century just spent from the birth of aviation, to become a pilot has ceased to be an impossible dream.

The last surprise was presented by the hosts; without taking anything away from the the guest Demo Teams’ beautiful performances, it was inevitable that the anticipation for Frecce’s exhibition was rising. Moreover, rumours had it that the Frecce would finally present a new figure, thus responding to insistent fans’ demand to introduce some novelty in the exhibition program. And, so they did…closing their performance, Frecce Tricolori greeted the audience with a new opening called “Scintilla Tricolore” (Tricolor Sparkle), a name chosen among the many proposals received in response to a public survey.

Borrowing a typical expression used in the showbiz, we can say that the celebrations of the 55 years of PAN had been a huge hit both critically and at the “box office” (by the way, entrance was free); it is very likely that the next event of this magnitude will be organized in five years’ time, based on this knowledge, we can already save the date!

Photojournalist at Aviation Photography Digest
Gabriele was born in Turin, Italy, grew up in Sicily and now lives in Rome. His love for aviation goes back to the days when he was seven years old, he started to collect the ‘History of Aviation’ sold weekly at the nearby newsstand. With that, he realized that his goal was to become a military pilot. This dream met a harsh reality when, during the medical tests, a defect in his chromatic sense of sight was discovered.

His interest in photography arose a few years later, when he bought from a colleague his first single-lens reflex camera, a Pentax ME Super. Then everyday life took its toll; working as an IT analyst, studying for an MD in political science and starting a family left no time for enjoying his old interest for aviation. One day in 2008, he decided to revive the passion, starting again to take pictures of aircraft each time he has a chance. Now, using Canon gear, he is striving to become a photojournalist.

Gabriele can be reached at: [email protected]
Send this to a friend
SUBSCRIBE TO OUR NEWSLETTER
All rights reserved © Aviation Photography Digest, 2018
Subscribe to our FREE newsletter and get notified when new articles are published.
Subscribe
×