The annual Oceana Air Show returned this year after last year’s budget related cancellation, bringing record attendance according to local news sources. The organizers always put on one of the better shows on the East Coast and this year was no exception. With the only US Navy Hornet demos anywhere this year and the usual fleet air power demo, this show was a must attend. This year’s show was partnered with the Navy Wounded Warrior / Safe Harbor program to bring attention to injured and seriously ill Sailors and Coast Guardsmen and the challenges they face.

NAS Oceana, located in Virginia Beach, is a Master Jet Base and is home to 18 Hornet and Super Hornet squadrons. All deploy on carriers with the exception of the VFA-106 fleet replacement squadron and the adversary squadron, VFC-12. 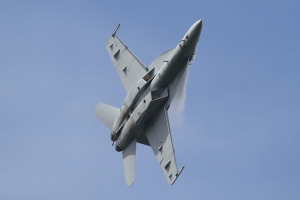 The show provides an opportunity for the public to visit the base and meet the women and men based at NAS Oceana who defend our freedom.

As mentioned above, this show was fortunate enough to feature both the Legacy and Super Hornet demos which were provided by the VFA-106 squadron. The Legacy demo was flown by Lieutenant Joe “Goat” Krukar each morning and the Super Hornet demo was flown in a F/A-18F piloted by Lieutenant Nate “Fonda” Miller with Lieutenant Jason “IAD…S” Hoch as the WSO. Over the weekend, there was rainy and overcast weather at times but that provided great vapor opportunities for the demo teams and the airpower participants. The airpower demo involved some simulated attack sequences , mock dogfighting, an air to air refueling demo and a formation flyby. These were performed by the VFA-32 Swordsmen and the VFC-12 Fighting Omars this year. 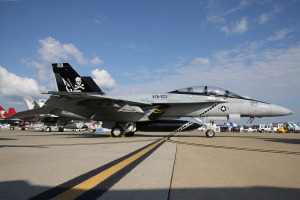 The statics were quite interesting with regards to the F/A-18 Hornet, as there were 9 color birds (CAG or DCAG) on display, which is highly unusual. There was also a Grumman E-2C CAG bird from the VAW-123 Screwtops out of NAS Norfolk. The Military Aviation Museum brought over their Grumman TBM-3E Avenger, FG-1D Corsair and Douglas A-1D Skyraider. ATAC brought over an F-21A Kfir and a Hawker Hunter for static display.

Civilian performers were plentiful and were quite diverse. There was Bill Leff performing his usual high level of precision acrobatics in his highly polished T-6 Texan complete with flashing lights. Bob Carlton performed a unique and graceful show with his Super Salto Sailplane to which he has attached a small jet engine. There was no military parachute team this year so Skydive Suffolk Demonstration Team stepped up and thrilled the crowds with their parachuting skills. Each day a group of wounded warriors were scheduled to do a parachute jump, although deteriorating weather cancelled Saturday’s jumps.

The Shockwave Jet Truck is always a huge hit with the crowd, especially the kids. The truck puts out huge flames from the three J-34-48 turbojet engines and surpasses 300 MPH down the runway. On the small side of things, the FLS Microjet performed a fast and entertaining routine much to the crowds amazement as how small it really is. The performance culminated in a race with the Shockwave jet truck, which the truck won on Friday and Saturday.

Kent Pietsch performed three separate acts in his colorful Cadet plane each day with some incredible flying skill and a lot of laughter during the comedy routine. He also landed the plane on the rooftop of an RV travelling down the runway. Greg Shelton teamed up with Ashley Battles to showcase some breathtaking wingwalking routines in the 1943 Super Stearman. It was quite amazing to see her hanging on upside down during the acrobatic maneuvers. The Geico Skytypers and Viper Air Shows rounded out the list of civilian performers. 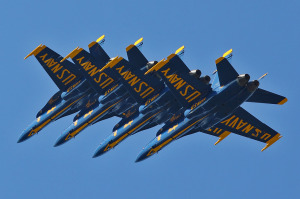 The Warrior Flight Team brought their L-39 jet painted in “Vandy 1” colors and performed a full demo each day, flown by former Tomcat pilot Mark “Crunchy” Burgess. They bring well-deserved attention to the Wounded Warrior cause.

There was no night show this year but they did have the Beach Blast on the oceanfront at 31st street. A Rhino from VFA-32 performed four burner passes at dusk and then the sky diving team jumped on to the beach.

As the headliner each day, the Blue Angels once again put on amazing performances of flying skill showcasing the talents and teamwork of the US Navy and Marines. While there was great weather for their Friday performance, Saturday’s show had to be called off a few minutes into the show due to the poor weather. On Sunday the weather cleared up right before the Blue Angels show.

One of the best things at the NAS Oceana air shows is the presence of squadron row – all the local and some nearby squadrons have tables put out where you can purchase squadron memorabilia such as t-shirts, hats, patches and challenge coins etc… Members of the squadrons are at the tables and it’s always interesting to chat with them.

With a full range of diverse aircraft, from a glider, to a micro jet to a Rhino, the crowd experienced the entire spectrum of aviation. The show organizers provided a full day’s worth of great entertainment for which this show has become known for.

Isaac can be reached at: [email protected]otodigest.com
Send this to a friend
SUBSCRIBE TO OUR NEWSLETTER
All rights reserved © Aviation Photography Digest, 2022
Subscribe to our FREE newsletter and get notified when new articles are published.
Subscribe
×