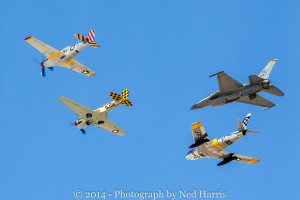 include: recruiting/retention, displaying the USAF’s modern aircraft for the civilian public, community relations, and to honor the brave men and women who have served, or are currently serving, in the USAF. Recognizing the benefits of the Heritage Flight program, in 2010, the Air Force Heritage Flight Foundation was created to help support the program and keep it active for years to come. 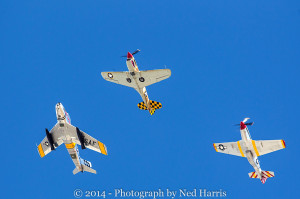 As in previous years, this year’s Heritage Flight Training and Certification Course was held at Davis-Monthan Air Force Base in Tucson, Arizona. The course took place from from February 25th through March 3rd. With mild winter weather and being the home to ACC’s Twelfth Air Force, Davis-Monthan AFB is an ideal location for this training. This year’s list of aircraft includes:

The aircraft is selected based on what is available throughout ACC. The military pilots do not necessarily fly aircraft from the base they are stationed at. For example, this year, the F-22A Raptor is flown by a Langley AFB pilot, while the aircraft are from Holloman AFB. For the military aircraft, at least two of each type of aircraft are selected to avoid too much “wear and tear” on a single aircraft and serve as a contingency in the case of mechanical issues. This can also be the case with the civilian aircraft where multiple P-51 Mustangs will be used.

Since the Heritage Flight Training and Certification Course takes place over the course of seven days (3 of which are flying days), the training is progressive. Early in the course, single ship demos evolve into two ship demos and eventually progress to multiple ship formations. While most of the pilots understand the intricacy of the aircraft they are flying, it is important for them to understand the nuances of the other aircraft as well. This is where the progression of training benefits the pilots most. Flying a vintage P-47 Thunderbolt along the side of a modern fighter such as an F-22 Raptor is not as easy as these pilots make it seem. This relationship with the other aircraft is developed throughout the training and certification course.

During the course of the training, Davis-Monthan AFB becomes host to many events that connect the Heritage Flight program with the community. Numerous organizations, including the media, were invited to participate in on-base events as the training progressed. These events provided a mini airshow for the guests and help educate them about the program.

From an aviation photography perspective, some of the best opportunities to photograph the formation flights were off-base. Since most of the practice took place at “show center”, or the middle of the base, and the angle of the sun was not always ideal, the aircraft were difficult to photograph in the air on-base. There are several locations off-base which ensured a better look at some of the aircraft as they were flying. 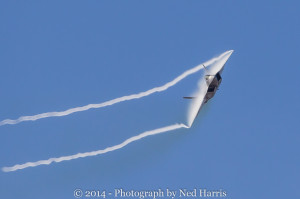 The highlight of the “warbirds” collection was the Republic P-47G Thunderbolt “Snafu” which was recently imported into this country from Europe and is owned by the Friedkin Family. The Friedkin Family owns many of the warbirds being used for the Heritage Flight. On the military side, the Lockheed Martin F-22A Raptor stands out. With the F-22’s ultra-modern stealth look and high performance capabilities, the Raptor represents air superiority for the USAF.

Overall, the Heritage Flight Training and Certification Course is a tremendous benefit to Davis-Monthan AFB and the surrounding community. The opportunity to see vintage aircraft flying along the side of the USAF’s modern airpower is an amazing sight. This program accomplishes several of it’s goals and it begins with the training and certification at Davis-Monthan AFB. All the hard work by those involved pays off with dividends such as a positive image for the USAF, the ability to recruit the best talent, a better relationship with the communities involved, and a way to honor those who served, and are currently serving, in the USAF.

A special thank you to Lt Erin Ranaweera of the Davis-Monthan AFB Public Affairs Office. Her hard work and effort organizing the media day event made the 2014 Heritage Flight Training and Certification Course a great experience for us.